Some old wizard name of Akronos has discovered how to split the atom, but an evil army is coming to take that technology from him in order to conquer the world. The cowardly wizard could use this "Geometric Nucleus" to defend himself, but noooo -- he dispatches his daughter Mila to go find the warrior Ator (Miles O'Keeffe), his former student. Cue the trials and tribulations involved in getting there, not the least of which are sunglasses-wearing evil soldiers who take Akronos hostage. Once roused from his hammock, Ator pulls a hang-glider from his back pocket and commences tossing bombs on the invaders surrounding the castle. Don't think about where the bombs came from, don't think about where the bombs came from.... Incomprehensible Italian sword-and-sorcery mess cut from the fabric of Conan's loincloth, this is a sequel to a 1982 movie, Ator L'invincibile, mercifully not in circulation. Fodder for one of the better Mystery Science Theater 3000 episodes. Watch this only if you miss your saving throw vs. crap.
Posted by Gilbert Jim at 12:00 AM No comments:

A hunter stumbles into a womb-like cave containing a clutch of alien eggs, which he destroys without a second thought -- doing little for the attitude of the mother, who proceeds upon a tri-state killing spree to avenge the loss of her offspring. All but one, that is -- discovered by young Tommy, who takes the egg home, where it hatches into a baby Philly Phanatic that Tommy dubs "Trumpy." Trumpy hoovers peanuts and popcorn by the bucket before developing a taste for hamsters. Meanwhile, the mother alien slaughters a rock band practicing nearby, just like Grendel does to the partying Danes in John Gardner's eponymous novel -- see, Grendel is metaphor for the Sapir-Whorf Hypothesis, so all the loud partying and singing drive it nuts, and it slays everybody just to shut them up, what with their self-limiting structures of conscious communication gumming up the works anyway. Like Grendel, the mama alien is eventually killed by somebody or other, but not before she thins out the human population, and Trumpy escapes into the woods to provide for the possibility of a sequel. Bizarro spaghetti-SF-schlock combination of E.T. the Extraterrestrial (which director Juan Simon is explicitly ripping off) and Dumbo (which he is not).
Posted by Gilbert Jim at 12:00 AM No comments:

Stefan is a mathematics student on self-imposed sabbatical. In Paris he commits a little burglary to raise cash, then heads south to Ibiza to commence a doomed love affair with Estelle. Warnings from friends fall on deaf ears, but soon enough Stefan learns the truth: Estelle is a heroin addict. [insert: organ stinger, 3 seconds] She promises to stop using, but her late-night dalliances with Wolf, the local supplier, continue. Stefan moves them to a villa on the other side of the island where they smoke hashish and take LSD and enjoy the blisteringly refracted sunlight because it's the 1960s, maaaaaan. Guess what: the cure doesn't take, and Estelle is back on the same horse she was riding before she fell off and it trampled her, or whatever. People in this movie are always saying things like "Groovy man, let's get high..." and that's when the dialog is comprehensible at all. If people had conversations like the conversations had in this film, we'd all be on drugs just to cope. Supposedly now a cult classic in Europe, on the order of Easy Rider (1969) in the US. The first of three films for which Pink Floyd provided the soundtrack, which is about the only thing More has to recommend it to modern audiences. And that's not much. So, how about a little less, please?
Posted by Gilbert Jim at 12:00 AM No comments: 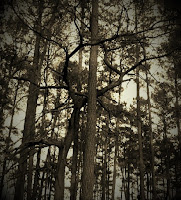 Texarkana filmmaker Charles Pierce's first project was a low-budget "documentary" about the Fouke Monster, a Bigfoot-esque creature roaming the bottomlands and swamps of the Texas/Arkansas border. The film collects various accounts of encounters with the creature, local legends and campfire tales tied together by a folksy narrator recounting how the creature scared him as a child and wondering if the thing is still lurking in the woods. Local citizens and landowners spin yarns of spotting the monster while on squirrel hunts and driving at night on lonely roads; at one point, a hunt is organized but once the dogs catch a whiff of the hideous thing, they go no farther. The centerpieces of the film are two disturbing scenes involving late-night attacks, one on a trailer where three teenage girls have a slumber party, the other on an isolated farmhouse rented by two young couples; the latter attack is a recreation of a newspaper account, but both occurrences too closely resemble archetypal "damsel in distress" horror-movie scenarios to carry much credibility. Hoax or not? One old salty codger, living for decades in a shack deep in the swamp, claims he's never seen any such creature. What is beyond dispute: despite the extraordinarily low budget (the movie was filmed on a borrowed 16mm camera, and it shows), or perhaps because of it, Boggy Creek is very effective at delivering some low-grade thrills. Pierce -- savvy to catch the Bigfoot craze in full swing, not long after the release of the infamous Patterson Film -- lovingly showcased the eerie shadows and sounds of the remote swamps in such a way that, sure, a shaggy 8-foot-tall monster seems plausible. And the fleeting glimpses of the creature, never fully revealed and often only heard, are just right. A huge hit at the drive-in theaters of the era, this was an undeniable influence on later films such as The Blair Witch Project (1999).
Posted by Gilbert Jim at 12:00 AM No comments:

Filmed as Tell Your Children by a church coalition -- intended as an educational treatise on the dangers of drug use, concerned/easily frightened parents the target audience -- the footage was re-edited by savvy investors and the retitled Reefer Madness became an underground classic on college campuses and the midnight movie circuit during the 1970s. A bizarre pastiche of blatant misinformation, clunky scripting, and campy overacting; no plot, just thinly connected vignettes detailing the criminal hi-jinks "marihuana" inspires among fiendish "hop-heads," including but not limited to: unmarried cohabitation, misadventure by automobile, rape, suicide, murder, and (shudder) jitterbugging. Scandal! At least the drug dealers, in their snappy suits and fedoras, look respectable. Why, you'd never know the evil at your doorstep, dressed up all fancy, just like the Devil himself is apt to be.... The 'Rifftrax' edition from Legend Films includes commentary from Michael J. Nelson, Kevin Murphy, and Bill Corbett of Mystery Science Theater 3000.
Posted by Gilbert Jim at 12:00 AM No comments: 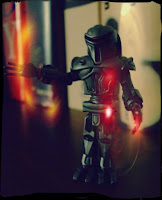 In a distant quadrant of space, an ongoing war between humans and Cylons --sentient, human-like cybernetic creatures -- enters its endgame following a sneak nuclear attack on human outposts (the Twelve Colonies of Kobol and primary planet Caprica), which are thoroughly destroyed. A handful of survivors escape by taking to whatever ships are nearby. This cobbled fleet falls under the stewardship of the only remaining warship, the Battlestar Galactica, and its beleaguered commander, Admiral Adama. Newly-elected President Laura Roslin, battling cancer and susceptible to drug-induced visions, instructs the skeptical Adama to chart a course for the legendary lost Thirteenth Colony (Planet Earth, duh) guided only by religious artifacts and vague prophesy derived from ancient polytheistic scriptures. Adama is grumpy about it, but follows orders, understanding that people need a more constructive, positive goal than merely maintaining their desperate flight from the relentless Cylons. They need to find a new home.

The mortal plight of these 50,000-odd remaining human beings is counterbalanced by the schemes and needs of the Cylons. They are a race eons old; twelve clone "models" of Cylon are known to exist, but only seven have been identified. The "Final Five" models have critical internal, subconscious knowledge of their racial genesis, but are scattered among the remaining human population, their memories erased and masked by new identities. To fulfill their destiny and forward their monotheistic system of religion/prophesy, the Cylons want to reunite with the Final Five, find their own way to Earth, and establish a permanent home world. But the "Significant Seven" are themselves divided about how to proceed: do they simply destroy the remaining humans (so the Final Five will then "download" into new clone bodies on their Resurrection Hub)? Or do they use, even team with, the humans to collectively find Earth and, eventually, peace? Even their primary pawn, human scientist Gaius Baltar, can't keep their machinations in order -- not that he tries much, being so sidetracked by his lust for Cylon Model #6 he can no longer tell reality from dream. A condition that may very well define the end (or is it the beginning?) of the Human Race....

War and Peace set in outer space; a serious SF drama about war, politics, culture, race, and the miraculous, unknowable nature of God. Showrunners David Eick and Ronald Moore remain philosophically pliable throughout, challenging viewers to pick a side, then painting the Cylons the same shade of Human as all the other human characters. Much that the 1970s-era show took for granted, this version cultivates and explores, building a world that supports two conflicting religions, neither of which can survive direct confrontation. This became problematic when it came to scripting an ending for the series, but the great strength of the overall Galactica narrative is in the questions it raises, less so the answers provided. Joss Whedon: "It's so passionate, textured, complex, subversive, and challenging that it dwarfs everything on TV."
Posted by Gilbert Jim at 12:00 AM No comments: