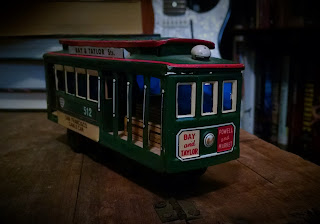 The title of Louis B. Jones' third novel initially gives the misleading impression of an intrinsically regional story, carrying no interest beyond the Sierra Nevada peaks. But this is a story of America, not merely California: the opening sequence cranks to a start in New York, at the George Washington Bridge, and drives us west on I-80, sightseeing across the across the fruited plains before finally ramping down onto the West Coast, the little town of Seawall, the terminal point where the narrative begins.

It's 1973, and the estate of James Farmican, a three-years-dead beat poet and literary idol to a generation recently passed, must be settled. The people left sorting through the debris, drifting from room to room in the gothic, doorless family mansion, are more ghostly than the departed writer who has bequeathed unto them this wreckage. Julia, the widow, has recently remarried Faro Ness, a pop-psychiatrist oblivious to his own creeping materialism, spouting anti-establishment pabulum even as he maneuvers to take control of the Farmican Estate. Her two children are: Peter, who dreams of living alone in the house after everyone else has relocated to Oregon, dreams of writing either an epic poem or an opera about the Donner Party but is stunted in his passion by a charming lack of focus and skill; and Wendy, ever on the lookout for her father's ashes which she had hidden in a TANG jar (now mysteriously mislaid), her sexual awakening disassociated in late-night junk food binges until the arrival of Baelthon, a local boy hired to help sort through the estate, since no actual member of the family can be bothered -- not even the prodigal stepson, Ed, arriving from Modesto upon word from Ness' lawyers that he may be inheriting the long-defunct (and essentially non-extant) Cornucopia Casino in Void, Nevada. Finally, rounding out this cast is the enigmatic Dean (or Merlin), a beat-generation holdover and former muse to James, now dwelling somewhere in the sub-basement, emerging briefly to issue cryptic instructions, or to perform seemingly meaningless marriage ceremonies.

It is upon one of these marriages that the characters' fates, swinging across the chasm of years to our own 1999, finally hinges. The whole story is framed by the character of Baelthon, as he looks back upon those pivotal few days -- though the narrative perspective shifts, liquid and dreamlike, as needed, to illuminate each of the Farmicans in turn; California's Over is at once too delicate and too complex to be seen through a single set of eyes. And there is a profound psychic pull to Jones's narrative, whose main strength is his ability to cast language like a spell. He writes exactly the way we remember: in disarming, sensory flashes.

Which, of course, illuminate something larger. Jones's first two novels were virtuoso in balancing slick plots upon elegant structures and teetering symbolism. Though he continues to play interesting games of literary association, the true reward of this novel is simple and emotional. The story finds itself in small, ordinary moments as the characters clumsily negotiate the labyrinthine house, its contents, each other. They are fully realized, flesh-and-blood, the stuff-of-our-stuff. As the family shifts and divides, everyone making knowingly, comically, wrong decisions, it's impossible not to love them for their bad choices. In picking through the belongings of their martyred beatnik father and their ignored or deflected emotions associated with those belongings, the story of the Family Farmican becomes the story of how we came to be here, in the late 1990s, of the choices we made when the idealism of the 1960s crash landed, leaving as debris the Resignation of Nixon, the Fall of Saigon, the Family of Manson. Same as Pynchon's nastily accurate Vineland, which shares the use of a Remembered California as a springboard to Today's America, Jones's novel points a finger at all the empty assumptions by which we've come to live our lives -- not in grand ideological or social accusation, but rather in personal, hopeful indication, that we might see the responsibilities in our weaknesses and failures, and thereby realize the path already laid, towards redemption.

Originally published in the Mobile Register as "Illuminating Flashes," May 02 1999
Posted by Gilbert Jim at 2:00 AM No comments: