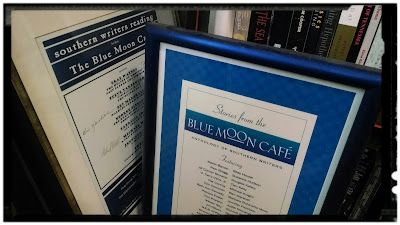 Christmas 1998, Sonny Brewer invited a retired actor friend of his, Sam Busby, to do a holiday reading at Over the Transom. We borrowed the photography studio space next door, cobbled together what chairs we had, and set out some cookies. Sam rolled out selections from Truman Capote, Shakespeare, the Bible, a solemn, gorgeous recitation of Silent Night. The gathered few were reluctant to leave. "We should do more of this," Sonny declared as we swept up afterwards. "This should be what the bookstore is for."

By the next holiday season, Kyle Jennings had come aboard and Over the Transom had developed a publishing arm with a book to promote: Frank Turner Hollon's The Pains of April, a slender meditation on aging, Jonathan Livingston Seagull set in a nursing home. During the SEBA bookseller's trade show that autumn, Sonny, Kyle, and Frank were introduced to William Gay by Tom Franklin, each there launching respective book tours in support of The Long Home and Poachers. Learning Tommy would be down in our neck of the woods around Thanksgiving, and with William in tow, an organic plan developed -- Let's paint the barn and put on a show! -- a one-night-only event featuring all three authors reading onstage, followed by an Over the Transom-hosted signing the following Sunday afternoon, corresponding to Fairhope's annual downtown "open house," merchants ceremoniously opening their doors in the hopes of attracting early holiday shoppers (spoiler alert: it generally works).

We were told we were crazy. Three unknown, debut authors, reading literature on a Saturday night, not just any Saturday night but during the Iron Bowl? Nobody would show, not even for free.

We secured use of Centennial Hall, which seats 200+ if you include the balcony. I dreamed up a circus poster design and an eponymous moniker for the event, Southern Writers Reading; Sonny supplied text and soon they were taped up in windows all over town. Kyle rented a van to shuttle everyone around (un-wrangled writers, scattered watering holes, so forth) and Sonny ordered giant "Over the Transom" magnets to slap on the doors. Crazy, whatever, we saw things lining up a certain, undeniably entertaining, way. Frank's book had sold well in the local market, serious accolades were boosting Tommy's freshly-minted Poachers, and The Long Home was to be reviewed in the New York Times the very Sunday morning William would be signing books at our storefront on De la Mare Avenue. We spent our energy praying for good weather.

Somewhere north of 100 souls ventured out to the reading that night, braving clear skies and scattered college football broadcasts. With Sonny as a born Master of Ceremonies on a set decorated with props borrowed from the bookstore, the evening began somberly as Frank remembered Robert Bell (author of The Butterfly Tree, a novel set in 1950s Fairhope) who had provided a soulful introduction for Pains of April; that very morning, Bell's daughter had called the bookshop to inform us of his passing. But spirits raised quickly: Sonny introduced each author by reading a particularly striking paragraph or three from their work, then asking, "Now, what were you thinking when you wrote that?" (Tommy tried to convince the audience his stories were written during commercial breaks in Friends marathons.) As William's thick rural Tennessee accent, song of pure earthen Southern literature, reverberated over the gathered, I thought to myself, "In ten years, it'll seem like a miracle, we got this guy to read here." 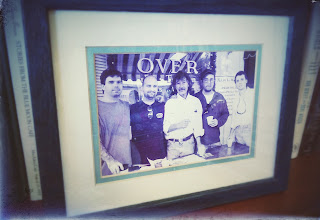 Up to that point, I'd drifted pretty casually through the 90s, bookselling at Page & Palette, endlessly scratching at a novel-in-stories, listening to a lot of surf music, not much else. I'd started working for Sonny more or less by happy accident, aggressively hanging around his bookstore until he offered me work, sort of thing. For the past year we'd been doing used-and-rare book searches, learning valuations and rummaging like biblio-anthropologists through library and estate sales to boost our own inventory; I self-taught myself book repair, tightening hinges, rebuilding channels, loving old books back to life (including a terrific first edition/first state copy of To Kill a Mockingbird lucked into by Sonny at a garage sale). Now here was a kind of energy swell happening, a wave to catch at last. The question arising wasn't Should we do this again next year?, but rather Can we have more fun doing this next year?

Yes, plenty more, it would turn out. Because we had, indeed, found what the bookstore was for.

As the next handful of years blurred past, Sonny toured the Southeast by way of weekend literary conferences, rooting out a network of emerging authors while his own writerly star brightened. Southern Writers Reading, which I dubbed a "literary slugfest" on our website, divided amoeba-like into two sessions, eventually spreading over two days -- including for a couple years a Friday afternoon luncheon with the authors, and "Alumni Grill" reading sessions to accommodate veterans who had enjoyed themselves so much in prior years it hindered their ability to stay away in succeeding years (this included, as it turned out, William Gay). The shows leapfrogged from location to location (our favored arena being Theatre 98), but remained counter-programmed against the Iron Bowl, and always ended with a celebratory Sunday afternoon booksigning at Over the Transom, where it wasn't uncommon for Sonny to bust out his guitar and start serenading everyone within range. We hosted bestsellers and award winners, Oprah picks and heralded debuts, a few special writers with nothing more than a good manuscript and some hope. We drew audiences from around the Southeast, selling out shows in advance. We attracted benefactors who opened their homes for generously grand post-show parties, or volunteered to host the visiting authors, or both. (For the record, we rarely declined such offers.) Things turned into a pretty fine ride, no matter the direction.

At some point in there, with scribblers coming out of the proverbial woodwork, Sonny declared our bayside town "the home of more writers than readers" (long, long before self-publishing became a thing); soon the non-profit Fairhope Center for the Writing Arts was drawn up, a board assembled, early plans made for Southern Writers Reading to be its tentpole fundraiser, and a resurrected Red Bluff Review (a one-off journal Sonny had edited some years prior) to be an annual tie-in, a chapbook of flash fiction commissioned from the authors we'd feature on stage. But a funny thing happened on the way to Theatre 98...

In a story unto itself, Frank's novel had meanwhile bounced onto the desk of Pat Walsh at MacAdam/Cage, who called inquiring about a follow-up; after contracting The God File, Walsh and publisher David Poindexter flew over to attend that year's [2001] Southern Writers Reading events, to hear Frank read from his new book, months in advance of its publication. They got more than that; they got a full-on grassroots literary revival, three days and more than a dozen authors, reading sessions that blended from one party to the next, Grayson Capps providing musical punctuation throughout. Poindexter would later describe the experience as "falling into a nest" of wordsmithing talent. "I don't get it," Walsh confided to me after just the first night, "We do this in San Francisco, we get seven people. You do it here in this little Alabama town, and a hundred plus show up." I didn't have an answer for him then, and I wouldn't have one now, other than we'd picked the right battle, some kind of magic, a celestial alignment, whatever, it worked.

Sonny, long-time sailor and therefore no stranger to celestial navigation, knew exactly where to steer. The year prior, following a reading by Suzanne Hudson that had the audience howling with laughter, he declared, "I wish I could publish that," then scanned the offstage shadows for Joe Taylor of Livingston Press, in attendance that night. "Joe, is she not a writer you'd be proud to publish?" Opposable Thumbs had been available from Livingston since late summer. So when from the podium at the conclusion of the ceremonies, Sonny began describing a hardbound anthology featuring not only all the authors featured that weekend, but all previous SWR participants, I could feel the question gathering in the aether. "David Poindexter, does that not sound like an incredible book?" What choice did the man have?

Inclusion on MacAdam/Cage's Fall 2002 list gave Sonny a manuscript-assembling deadline of mere weeks. No problem: not only did everyone contacted gladly offer up a submission within a month of being asked, but Sonny found himself eyeball-deep in rich material besides, even as the contributors list swelled to include writers who hadn't (or hadn't yet) been featured on a SWR stage. The most difficult task involved therefore fell to coming up with a zippy title; nothing useful suggested itself, and everyone hated everyone else's ideas, which ranged from the square-pegged Red Bluff Reader to simply and vaguely Fairhope. Finally, Frank Turner Hollon twigged on the Blue Moon Cafe, a fictitious Fairhope location mentioned in Robert Bell's Butterfly Tree. 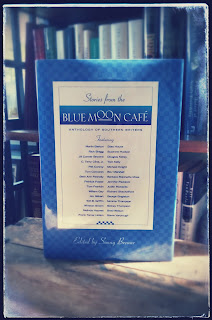 An unbroken circle. Often enough in the year or so before all the literary shoutin' began, I'd drift up to the bookstore of an evening, where the bounty of some or other "book haul" waited to be cataloged, tomes piled elbow-high in the narrow back area we dubbed the Engine Room. Just to do an after-hours repair on some volume, or key a few books into our online inventory, Zen work in the quiet lamplight, a bubble of a moment without foot traffic or phone interruptions that could equally be spent freely leafing through generations-old travelogues, forgotten fiction, pages where the foxing was overtaking the baroque woodcuts, scandal-ridden biographies of vaudeville-era celebrities. You never knew when a treasure would flutter out of a binding: an old love letter, perhaps never sent; grandly printed opera tickets; undated photographs of mystery relatives; newspaper broadsheets too brittle to be unfolded, their news turning to acid. Alchemic inspiration, the after-dinner hours were best for such work and discoveries. (Also because, as every writer will tell you, there is no balm quite like procrastination.) And often enough, it wouldn't be long before I'd hear Sonny's own keys rattling at the lock. "Someone needs the Cafe," he'd say in greeting, tossing his longshoreman's cap atop the glass front counter. And that was the mantra. Whenever asked, strapped for time and energy as he was, devoting his mojo to numerous projects ("Busy as a one-eyed cat watching three rat-holes" was a favored description), why Sonny kept the bookstore open, that was the perpetual answer. Someone might need some well-lighted place, even if (especially if?) it were only to be found within the pages of a book. That, too, is what a bookstore is for.

Short story long, as Kyle used to say, that's the backstory behind this book with the checkered blue jacket designed like a menu for a diner ready to serve up thirty different Southern authors. Jacket is protected by Mylar, small purple ink smudges on interior fore-edge but otherwise minimal bumping, Near Fine. Book block is straight and sound, clean edges, tight channel. Clean boards, silver title stamping on spine (some gold variants are known). Ephemera laid in from publisher launch events in Jackson and Oxford MS, as well as later promo information for a Penguin/NAL reprint, and a publisher's postcard. Interior stories are SIGNED by nearly everyone involved, including publisher Poindexter (who quipped at the time, "I usually only sign checks.") Typical shelfwear to board/heel edges. In all, a Near Fine/Fine association copy. [NFS]
Posted by Gilbert Jim at 2:29 PM No comments: