A group of geeky suburban preteens led by Charles (he of the camera and vision) and Joe (he of the makeup skills and the Dead Mom) sneak up to the old train depot one school night circa 1979 to surreptitiously film a scene for their ongoing 8mm zombie epic. They've even managed to convince Alice, a hottie from homeroom, to play a crucial supporting role (turns out she's a natural actress, the only one on set, which never hurts). A train approaches, Charles yells "Production value!" and calls for action, but the kids get a little more than they bargain for: their science teacher Dr. Woodward drives his truck onto the tracks, causing a ridiculously massive and elaborate (not to mention fiery) derailment. In the resulting rubble, Joe finds a stash of small white cubes that look like Rubik skeletons; he pockets one just as Shadowy Authority Figures begin arriving at the catastrophe. The kids make their escape -- though not, of course, before being warned by the dying Dr. Woodward they must never speak of this event lest they and their parents be killed. In the days that follow, while the super-8 footage from that night is processed out of town, the mystery of the crash deepens as Joe's dad Jackson (also the deputy sheriff) is stonewalled by the government's cleanup crew; he's additionally frustrated with Joe's burgeoning involvement with Alice (who happens to be the daughter of the man he blames for his wife's/Joe's mom's death). Charles keeps filming, using the train wreck as background for his zombie invasion project, though actual stranger things (see what I did there?) begin happening in town: engines vanish from all the vehicles in a used car lot; bizarre lights are seen in the town graveyard; that weird little cube punches a hole in Joe's bedroom wall so it can fly up and start pecking at the side of the water tower. Once the kids break into Dr. Woodward's storage locker of confiscated property and secret papers, they might find answers -- but can they do it before the Government forces an evacuation and burns down the whole town to erase the mystery forever?

J.J. Abrams may well be the modern master of the Plot Hole, but he has the decency to stuff said holes with enough nostalgic flavor and warm callbacks to other films that it just doesn't matter. He's not crafting cinematic greatness, he's banging out a popcorn movie and he's totally not ashamed of it. Super 8 is quilted from the career of Steven Spielberg (whose company produced), recalling Close Encounters of the Third Kind (the evacuation from town as the Army sweeps in to control the narrative; the final scenes), E.T. the Extraterrestrial (alien stranded far from home), and The Goonies (the kids always know what's up!) though Abrams tosses in his own familiar devices (fictitious documents that provide the key to the plot; all those damn coronas). But chiefly, he accurately recalls a specific time and place better than Spielberg ever could while actually standing in that specific time and place. And let's not even mention Ready Player One (2018), okay?

Full disclosure, I'm in the bullseye of Super 8's target audience: Not only did I traipse in exactly such semi-miserable looking middle class suburbs during the late 1970s, trying to lose myself in afternoon-TV creature features, SnapTite monster models, and comic books, I was part of a small group of likewise fanboys who made 8mm films as a hobby, using a silent Bell & Howell rig to animate our Star Wars action figures (eventually setting them on fire, anticipating the excessive explosions in this film by more than 30 years). My aim back then was to be the kid from Disney's Mystery in Dracula's Castle (which featured a lighthouse instead of a castle, no real mystery to speak of, and certainly no Dracula), stumbling upon some Important Adult Event while out filming in the neighborhood. Abrams is careful, subtle with his cinematic wish fulfillment exercise: no beating the audience over the head with a knowingly packed soundtrack of groovy late-70s tracks; you've got to like a movie that knows just how to use Alan O'Day's "Undercover Angel." A pretty simple come-of-age-&-let-things-go story; things get heavy handed towards the end, but most everything works. Some critics espouse that the best films work like dreams -- non-linear and functioning more off emotion than logic. Super 8 is like those dreams which capture us near the moment of waking, when we know we're dreaming but are still willing to go along with the ride.
Posted by Gilbert Jim at 12:00 AM 1 comment: 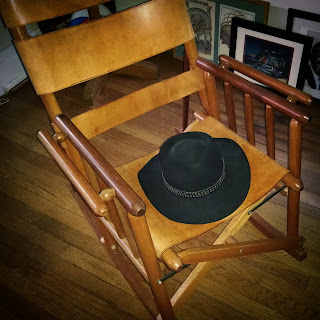 A decade ago, I was introduced to Wayne Greenhaw with the words, "He's a friend of Harper Lee." The Mobile Register had recently published a short essay of mine on Ms. Lee; because many in the area love to discuss her, I'd subsequently met many "friends of Harper Lee." (In this neck of the woods, "knowing" Harper Lee is akin to having "been at Woodstock" in 1969: If half as many aging hippies who claim to have been at that festival actually were at that festival, attendance would have numbered in the many millions.) So I shook Wayne's hand with a kind of gentle resignation, thinking, "Sure you are."

He met me with a look I came to know well over the resulting years: a shiny-eyed wink coupled with a wry grin transmitted through pursed lips, the look of a man with a funny secret, a secret he was looking to share with just the right person. He was, after all, wearing a funny shirt, one of those tropical print jobs usually donned by gringos in an effort to validate their citizenship in Margaritaville. What friend of Harper Lee would wear a shirt like that?

Prior to knowing Wayne, my ideas of the writing life could be somewhat romantic and limited: wild-haired semi-recluses who observed from afar, perhaps so dedicated to literary craft they were effectively detached from mere human interaction, thus able to comment objectively. Wayne taught me otherwise. Wayne went out and bravely touched the world, and that makes all the difference.

He made his life and his career upon the Alabama earth where he was born and raised, or, rather, forged: Wayne overcame disfiguring polio by a combination of sheer will and the freedom provided by voracious reading while marooned in a body cast after corrective surgery. Early on, he made a habit of difficult, probing questions; upon quizzing his grandfather as to why some of his cousins had participated in a Klan march through his hometown of Tuscaloosa, he was told, "They don't have any sense. But you do." This was a responsibility Wayne took to heart as a reporter in Montgomery, seeking to uncover injustice, to expose those who abused or even simply neglected their power, to give voice to those being denied their say. The list of those he intimately profiled or interviewed (and often befriended) is a Who's Who of the Civil Rights era: from Martin Luther King to George Wallace to Presidents Jimmy Carter to Bill Clinton, Wayne covered them all. In the course of a career that included over twenty books, he also managed to scoop the national media not once but twice: beating by a day Seymour Hirsch's famous expose of the My Lai Massacre, and later outing feel-good memoirist Asa "Forrest" Carter as a staunchly racist pro-Segregationist (the author of The Education of Little Tree was the James Frey of his day).

Wayne could have easily angled his career differently, moved up the journalism chain-of-command, probably landed a Pulitzer or two while reporting for the Grey Lady herself. Instead, as Wayne Flynt pointed out in his eulogy, Wayne was the first phone call made by national correspondents who wanted to know what was going on in Alabama when a political story started breaking. He was the man on the ground. He was the touchstone. He held the truth. And all those other boys with their offices in bigger cities, they knew it.

Despite the often painful truth-telling that compelled him, Wayne was a happy man, one of the happiest I've ever known. He relished travel, particularly to his beloved second home of San Miguel de Allende, Mexico, where he'd once done some drinking with Jack Kerouac (and a locale which explains his love of tropical shirts). If he discovered some new music that thrilled him, he was quick to provide copies for his friends, sharing his enthusiasm. He sought good company and conversation, especially in context of gourmet food and drink. Munificent as he was, his heart belonged to Sally, his wife of four decades, with whom he explored the corners of the world (but always ending up back in either Mexico or Montgomery with their dog, Ellie). And though indeed happy, like the best champions, he was not necessarily satisfied. That much is evident in the fact that he never stopped working; his final book, Fighting the Devil in Dixie, is arguably his best, outlining his time in the trenches, placing him firmly within the history he sought to cover, recalling that the hard work done back in the opening moments of the Civil Rights movement only paved the way for the hard work we must all continue to do.

In February, I traveled to Florida to participate in a writing conference; Wayne was there as well, promoting Dixie. On a panel with three other authors of Civil Rights books, he told a story I'd not heard before (and I'd heard Wayne tell a million), of being clubbed from behind one night while inserting his key in his apartment door. His reporting of Klan members and dirty politics had earned him more than a reputation as a skilled wordsmith -- it also earned him a concussion. And rather than shrink back, Wayne Greenhaw wore his bruises like a badge of honor. He never stopped filing stories. And forty years later, here he was with a nationally acclaimed book, recounting it all.

I was struck anew, then, by this warm and generous man I'd known for years -- a drinking buddy, a confidant, a rascal of a guru if ever there was one -- reminded of his honorable place in an otherwise brutal history. We often view our friends as simply our friends, rarely taking time to consider how their works have shaped them, and how these works have, in ways large and small, equally shaped the world we live in. Or how this, in turn, makes us responsible for shaping our own world in whatever ways are available to us. Wayne Greenhaw persistently chose the tools of Truth and Joy, and he worked to shape his world despite all resistance. We should all work so hard, for so long, towards such an accomplished ending.

Originally published in the Mobile Register, June 19 2011
Posted by Gilbert Jim at 5:19 PM No comments: