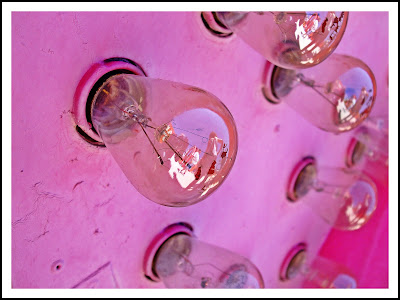 You were born together, and together you shall be forever more. You shall be together when the white wings of death scatter your days. Ay, you shall be together even in the silent memory of God. But let there be spaces in your togetherness, and let the winds of the heavens dance between you. Love one another, but make not a bond of love: Let it rather be a moving sea between the shores of your souls. Fill each other's cup, but drink not from one cup. Give one another of your bread, but eat not from the same loaf. Sing and dance together and be joyous, but let each of you be alone, even as the strings of a lute are alone though they quiver with the same music. Give your hearts, but not into each other's keeping. For only the hand of Life can contain your hearts. And stand together yet not too near together: For the pillars of the temple stand apart, and the oak tree and the cypress grow not in each other's shadow.
-- Khalil Gibran, The Prophet
Posted by Gilbert Jim at 9:30 PM No comments:

Ex-con Danny Ocean is out to even the score with Las Vegas casino owner Terry Benedict, who's now dating his, Ocean's, ex-wife Tess. The goal is straightforward: rob three casino resorts all sharing the same underground money vault, on fight night when the coffers will be stuffed. This is no simple smash-n-grab, however: Ocean and his buddy Rusty, bankrolled by a rival casino magnate, put together an offbeat team of experts -- pickpockets, explosives and surveillance geniuses, model builders, acrobats -- each assigned a specific task in the overall scheme. Casinos being somewhat protective of their on-hand cash, there are arcane, ridiculously elaborate security measures which must be overcome or disabled without alerting Benedict and his army of watchful goons that criminals are right beneath their impeccably mannered noses. Decadently stylish, sexy, and fun, just like Vegas itself -- and the team of diverse actors (including but in no way limited to Matt Damon, Don Cheadle, Elliott Gould, Bernie Mac) is having so much obvious fun, what George Clooney said about the Rat Pack-stocked original is equally true here: "You'd pay money just to watch those guys sit around and drink coffee." So what if the caper ultimately hinges on a couple of unlikely events and improbably timed coincidences? Or does it... The reveal at the end, laying out how the team tricked not only Benedict but also the audience into believing their "multiple cons" are anything other than smoke and mirrors designed to fool the casino goons into doing all the heavy lifting, is classic sleight of hand, if not downright slick dealing from the bottom of the deck. (Extra points for hilarious Trojan Horse usage of those ubiquitous escort brochures and "lady card" handouts that plague pedestrians along the Strip.) Still, this movie leaves burning questions: Does Clooney ever look disheveled, even when he's disheveled? Why is Brad Pitt so hungry? What is the ongoing appeal of Julia Roberts? The world may never know. Followed by imaginatively titled sequels Ocean's Twelve and Ocean's Thirteen.
Posted by Gilbert Jim at 12:00 AM 1 comment:

A giant beast, answering to the name of Utam, stomps the natives flat in some remote Himalayan location that definitely isn't Shangri-La. Greed-headed entrepreneurs scheme to relocate said beast to the city so they can make some moolah. Samantha, an animal-loving white lady in a leather (!!!) bikini swings from vine-to-vine and pontificates the ramifications of the whole affair. Low-rent mashup of elements from King Kong (1933), Mighty Joe Young (1949), and Tarzan (1932), timed to piggy-back off the "success" of the 1976 Dino De Laurentiis-model Kong. Throw in some insipid love triangles (including, no kidding, a jealous Utam), some stoned-looking leopards battling sluggish full-bellied pythons, Utam foaming at the mouth like a spoiled Trump at every opportunity, and the best I'm-Just-Sucking-Out-The-Poison scene this side of Alex Cox's Straight to Hell (1987), maybe you won't even mind how cars randomly explode as if the backseats are stuffed with C4. (Samantha's perilously skimpy bikini top, ever threatening to flop off, is an additional distraction.) A conspiracy of back-projected mayhem, clumsy editing, and inappropriate canned music keeps everything stumbling towards the inevitable moment when Utam straddles a skyscraper and shakes his fists at the helicopters circling his noggin. Once again, when the monkey die, nobody cry. AKA Goliathon, AKA Xing Xing Wang. Call it whatever you want, call it a jalapeno-stuffed lychee, when the end credits roll you still won't understand the coppery aftertaste in your mouth.
Posted by Gilbert Jim at 12:00 AM No comments: