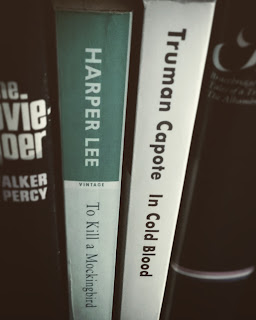 I recently spent a couple hours perusing Author Unknown by Don Foster, Vassar College professor of English and forensic linguist. Foster created an academic stir by attributing "A Funeral Elegy" to William Shakespeare; in less highbrow feats, he deduced Joe Klein as the "Anonymous" author of Primary Colors, and was also hired by the FBI to profile the Unabomber (before the Unabomber became known to us as Ted Kaczynski) based on language and idiosyncrasies in the typescript of the infamous Manifesto. As a matter of personal taste these pursuits interested me less than did a chapter on Thomas Pynchon, rumored author of a spate of quirky letters-to-the-editor sent to an alternative northern California newspaper in the 1980s, when he was supposedly in the area penning Vineland. (Foster decided Pynchon was not the guy, much to the relief, apparently, of Pynchon.)

Reading Foster's literary-gumshoe exploits brought back to mind an old regional argument: Did She or Didn't She? For years I've heard the rumor that Harper Lee did not write To Kill a Mockingbird, that it was in fact penned by her childhood buddy Truman Capote. You're likely to first hear this rumor mongered in the affirmative, something like this: It's a ridiculous notion that an unknown writer would turn out a single, perfect novel, then cease writing (or at any rate cease publishing), disappear completely from the Literary Radar, and communicate to the reading world via a profound silence that they damn well better not expect anything else from her, either. She's being silent because she's keeping a secret, and the secret is that she doesn't write at all...

Just as, in this region, you must cheer for either Auburn or Alabama, you must also take an absolute side on this issue. Reclusive as she is, "Nelle" doesn't offer much support; at least with the likes of, say, Salinger and Kesey, who made occasional appearances (even if only in the form of salacious biography), there was always hope they were still writing. Not so much with Lee, who endeavors to stay out of the spotlight. Still, the fastest way to the other side is: Hey, if you'd written To Kill a Mockingbird, you might retire from writing, too. I know I'd seriously consider it.

And while I am certainly no "forensic linguist" (I am often surprised to find, once per month when my bank statement arrives, that I myself hand-wrote a number of questionable checks) I like to think that I am a fairly alert reader -- my near-spotless driving record attests to the fact that very few stop-signs escape my notice. So I decided to read To Kill a Mockingbird and a work by Capote back-to-back, and thereby make up my own mind.

It had been two decades since I read Harper Lee's novel as a high school assignment, so I was essentially approaching it with a fresh view. I found a story efficiently told, a narrative that does little more than serve the action and the characterizations. Nothing distracts the reader from what happens on the page: no poetic diversions, no artsy intrusions, no verbal pyrotechnics. Just minimal language which perfectly suits the structure -- a powerful tale is allowed to tell itself.

To follow up, I chose In Cold Blood, which was entirely new to me. Given this story's basis in hard fact, I figured Capote would treat the material in a straightforward manner, as free of literary structure, voice, and artifice as he could manufacture. I figured this correctly: Capote did his best. But even in matter-of-factly covering the Clutter murders, he's still Capote: those charming turns of phrase, those imaginative, evocatively precise similes still spice his prose and delicately render characters and events.

I'm no expert on Truman Capote; I've read Breakfast at Tiffany's and A Christmas Memory (both of which broke my heart), I've had a go at Answered Prayers, and for what it's worth I've seen the movie Murder by Death a couple times. Nor am I an authority on Harper Lee, and I know absolutely nothing about the friendship that the two enjoyed. I only know just enough to have nearly formed my own opinion in answer to Did She Or Didn't She? even before I read these two books. And reading them merely cemented that opinion.

The whole thing, to my ear, sounds too close to the assertion that the 1969 moon landings were faked in a Nevada television studio, begging the question: Why? Any possible answers must be constructed from fringe reasoning. You certainly can't take anything away from Capote, saying he didn't write it; he's got plenty of masterpieces under his belt. And I'd rather give credit where credit is due. I firmly believe, in my amateur "forensic linguist" view (and also in my heart, where it matters most anyway) that Harper Lee wrote To Kill a Mockingbird -- just like it says on the cover. Even if you want to insist that she didn't write it -- that at some stage in the game a different hand tinkered with or restructured or rewrote the initial drafts -- I think you'd still have to admit it was written by someone other than Capote. The styles simply differ too much, according to my reading.

Still, one cannot deny the fun of playing parlor games with these ideas. It's fun to speculate how Capote may have helped Lee in places, telling her how a character should say this rather than that, how a scene might play better if written from a different perspective, that sort of thing. And it's equally fun to turn the tables on that game. If Capote and Lee were tight enough for him to edit and shape her drafts, well, how might she have affected his work? Perhaps… hmmm--perhaps it was she who devised A Christmas Memory, that fundamentally sentimental tale that is nearly singular among Capote's writings. Maybe Harper Lee even wrote it, from idea to draft to finish, and Capote only did a final polish. Hmmmm….

Originally published in the Mobile Register, May 13 2001 as "Cold, Cold Mockingbird"
Posted by Gilbert Jim at 2:00 AM No comments: