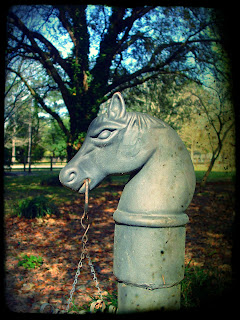 It's a surreal joke, with a winding punchline worthy of Mark Twain: When is the South not the South? When it's the Old Southwest! This shifting literary borderland -- populated by mustache-twirling villains, inept but determined (and uncannily lucky) lawmen, saloon brawlers boasting how they could whup Sampson himself, misunderstood hookers with perfectly calibrated hearts of gold, not to mention Johnson Jones Hooper's infamous Captain Simon Suggs and Twain's own celebrated jumping frogs -- is nowhere funnier than where mapped by Charles Portis in his novel True Grit.

Portis hails from Arkansas, a state many would consider decidedly Southern, and his novel makes affectionate, specific use of the setting: main character Mattie Ross takes bold pride in repeatedly reminding others how things are accomplished in her native Yell County, just for starters. Still, several initial reviews of the book took care to point out the "Western" aspects, with Michael Cleary defining Portis as "one of the most inventively comic writers of western fiction" in Twentieth-Century Western Writers.

Location-challenged reviewers aside, the story is relatively high concept, and certainly familiar to readers of pulp westerns: the aforementioned Maddie seeks justice for the murder of her father by one of his hired farmhands, Tom Chaney, who has taken up with a band of outlaws led by the nefarious Lucky Ned Pepper. To apprehend (or kill, whichever) the dastardly Chaney, Mattie treks to Fort Smith for the purpose of hiring a lawman with "true grit," and finds near-enough in the figure of Federal Marshal Rooster Cogburn. Also on Chaney's trail is a Texas Ranger, name of La Boeuf; eventually -- and despite their differing motivations, which range from sheer revenge to simple cash reward -- these three ride out together in search of their quarry.

Though the novel could easily carry different genre labels (satire/humor, coming-of-age) at this later date it's no feat to look back and ascertain how True Grit came to be shelved as a Western rather than, say, a Southern (a decent tag which would fit many books, and that some have tried to make stick, though the adhesive apparently still needs work). The initial marketing of the book is not terribly at fault: the first edition jacket design features a simple illustration of a stern-looking young woman holding in one hand the reins of a horse and in the other the barrel of a rifle. While this iconography telegraphs "Western" for sure, it also merely reflects the essential elements of and suggests a time-frame for the tale resting between those covers. True Grit is Mattie's story, in both plot and tone (she's the first-person narrator, recounting her adventure some sixty years after the fact).

But almost unarguably the main reason: scarcely a year following publication, out from the Hollywood hills loped a popular film starring beloved "cowboy actor" John Wayne as Cogburn, a role which finally earned him an Academy Award. But John Wayne alone did not brand True Grit as a Western; the 1969 film takes many liberties with the novel, beginning, importantly, with the setting: the scrubby, mountainous landscape of Ouray County, Colorado, stands in for the Ozarks, and thus does the movie unavoidably "look" like a traditional Horse Opera. (Additionally, the screen version moves Cogburn to front and center, correspondingly muting Mattie's acerbic attitude and commentary -- an undeniable charm of the novel.) Interestingly, Vincent Canby, in his mainly positive review of the film for the July 4, 1969 edition of the New York Times, had this to say: "I couldn't quite understand what all the fuss was about when the Charles Portis novel hit the best-selling lists last year. The book was strictly freeze-dried nostalgia, which imitated the flavor of nineteenth-century American writing without ever making you believe it was as good as the real thing (Mark Twain, Bret Harte)."

Though contemporary full reviews of the novel are now scarce, Canby's comments seem to be at odds with those short blurbs and slug lines which do remain accessible, either printed on the front endpapers of the paperback editions or elsewhere. In the New York Times Book Review, Richard Rhodes called the book a "skillfully constructed ... comic tour de force," echoing the sentiments publisher Overlook reprints on their current edition, which also features an afterward by another Southern novelist, Donna Tartt -- who proclaims the book a "masterpiece" even as she notes how well it captures "the Wild West of the 1870s."

It is as though the film, despite its bold differences from the source material, has supplanted within what Carl Jung would pinpoint as our Collective Cultural Consciousness the true character of the novel. In that sense, at least, Mr. Canby has had his way -- despite the fact that Portis' novel sold millions of copies well into the 1970s and for a short while was taught in schools, when most people think of True Grit they are thinking of the film and not the novel, thus bringing to mind stereotypical Western iconography. Meaning: horses, shootouts, lawlessness, and of course John Wayne. (Doesn't help that the latest [2004] edition of the True Grit paperback features silhouetted saguaro cacti -- which grow only in the Sonoran Desert. Does everybody around here need a map?) Of course, American pop culture sensibilities are finer attuned to cinema than to the written word, at present. It could even be argued that many people, in remembering moments from their favorite books, are actually remembering details from the better (or at least most persistently referenced and shown) movies made from them. Motion pictures like To Kill a Mockingbird, Breakfast at Tiffany's, Willy Wonka and the Chocolate Factory, The Maltese Falcon, and The Lord of the Rings have all come to be considered as powerful complements, if not outright equals, to their literary sources. (There are even cases -- Love Story, Jaws, even Dracula comes to mind -- where the film treatment might be preferred over the books.)

Assisting this perception, True Grit, despite its initial popularity, remained out-of-print for nearly twenty years. In an essay for Salon, Allen Barra writes: "True Grit's going in and out of print over the last four decades probably has more to do with a reluctance to take the western seriously as literature." Which is a fair point. By the mid-1970s, the Western had fallen out of favor; the dime novels and pulps and Saturday serials which had popularized the genre were long gone, Westerns rarely produced in Hollywood anymore, even the long-running TV series Gunsmoke reached the end of its run. And, in favor or not, "Western" is an easier tag to apply than "Southern." Particularly when only remaindered and hand-me-down copies of the novel were available, and the film version had free reign to establish itself in the cultural memory.

Not to put too much blame on the author, but another factor in this slightly askew labeling might well be the sparse, pigeon-hole proof output of Portis himself. His career as a novelist spans from the 1966 publication of Norwood to the 1991 appearance of Gringos; counting also the 2012 essay collection Escape Velocity, Portis has produced only six slender tomes over a five decade period. With topics ranging from ridiculous secret societies to bus-driving cuckolds to UFO hunters lost in Mexico, his novels have only one thing in common: a distinct comic sensibility. Given a one-line description of each, one might reasonably assume all five are the products of different individuals -- particularly since we readers are accustomed to authors tackling recurrent story structures, subjects, themes.

Which brings us back to Mr. Cleary's assertion that Portis is "one of the most inventively comic writers of western fiction." In the final accounting, given his disparate if slight oeuvre, Portis can no more be counted among the writers of "western fiction" than can be Mark Twain, whom Mr. Canby thinks Portis is clumsily aping. At least Donna Tartt doesn't entirely miss the mark -- the final pages of True Grit do specifically satirize "Wild West" exaggerations, as Rooster is remembered as having become an actor in a travelling circus, cashing in on his rough-n-tumble lawman-of-the-frontier persona. He rode with Quantrill! the handbills for the Cole Younger/Frank James show say, He rode for Parker! -- a brief but snarky reference to the showmanship and commercialized myth-making which still colors popular American perceptions, far contrary to reality, of what the West was like in the last couple decades of the 19th Century. Looks like we all need maps, if not well-researched guidebooks.

Perhaps the grand irony here is, Portis was trying to disassemble the Western, not contribute to the canon. Though it would seem he's been largely misunderstood, given the prevailing comic sensibility of the novel, Portis probably still would argue his joke landed correctly -- squarely on the heads of his audience. Having scribed Mattie's own inflexible worldviews, Portis shows he understands both the folly and the comfort of unchanging perception. And if anyone appreciates the humor of a grapefruit being labeled as an orange, it would surely be Charles Portis.
Posted by Gilbert Jim at 12:00 PM No comments: