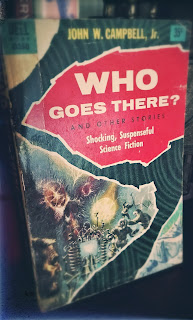 That group of writings which is usually referred to as "mainstream literature" is, actually, a special subgroup of the field of science fiction -- for science fiction deals with all places in the Universe, and all times in Eternity, so the literature of here-and-now is, truly, a subset of science fiction.
-- John W. Campbell, in the introduction to Analog 1 (Doubleday, 1963)
Posted by Gilbert Jim at 2:05 PM No comments: