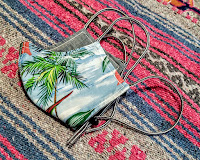 A desperate couple, William and Susan, use a new time travel service to escape backwards to 1938 (of all years), evading their own participation in the machineries of a horrible far-future war. They attempt to disappear among the carnival crowds in Mexico but are doggedly pursued by agents of the travel service, determined to bring them home and fold them back into the service of war: "The inhabitants of the Future resent you two hiding on a tropical isle, as it were, while they drop off the cliff into hell. Death loves death, not life. Dying people love to know that others die with them. It is a comfort to learn you are not alone in the kiln, in the grave."

There's been a joke going around of late, essentially: It's a certainty humans will never invent time travel; we'd have doubled back to fix 2020 by now. Argue all day long about what timespans might need fixing in what order should we ever actually gain the technology to spin clock hands in our favor, Ray Bradbury's dialog above holds particular sting in a year with a global pandemic spreading and so many blockheads refusing to wear a simple, precautionary mask as we all plunge helplessly forward in time. Ready or not, here comes the Future...
Posted by Gilbert Jim at 12:00 PM No comments:

Science Fiction Hall of Fame entry by Damon Knight is an alternate take on Lovecraft's perennial "Outsider," in this case a genetically altered exile viciously roving a future world. Short narrative follows the wicked exploits of our unnamed, lawless, self-described king of the world, free to do as he pleases, ruining property and terrorizing citizens (whom he dubs non-imaginative "dulls") who merely wait helplessly until he passes like a summer storm. He can work great mischief but can do no physical harm lest he fall into an epileptic seizure. Turns out, this is his sentence for having committed murder while a 15-year-old young adult: his body chemistry has been tweaked to render him both ugly and odorous, making him more easily avoided and ignored, elevating his status as homeless pariah even as he visibly trolls the surrounding society. The story catches this wretch at his breaking point, no longer angry at his fellow man, merely desperately lonely for companionship; his "creative" outbursts of late have been little more than distorted yawps for attention. This clarifies an underlying tragedy: not only did our antihero commit his crime while an admittedly abnormal youngster, he seems to suffer from a psychological malady not addressed by the same sciences capable of making a monster out of him. Hard to tell the cure from the inherent poison? Better to undergo capital punishment than suffer certain kinds of kindness.

Posted by Gilbert Jim at 7:58 AM No comments:

Neal Asher in Analog, May/June 2020. Interstellar exploration team led by Perrault, Gleeson, and Arbeck seeks to converse with a unique alien life form; they are boots on the ground for Mobius Clean, their ultimate mission coordinator: the imbedded AI of their orbiting starship. Arbeck is a Golem android, in charge of military protection for the two scientists: Perrault is the human interpreter, wearing a biotech "shroud" to enhance his communicative powers, enabling him to process clues from pheromones and other cues in the surrounding atmosphere, thereby building a language matrix from literally thin air (this among other skills). Gleeson is an archeologist specializing in alien civilizations, determined to collect information about the creature's culture faster than anyone else on the team. All wear biosuits equipped with tech augmentations that help solve the puzzles of the story: The more advanced technology became, the more it came to resemble life and the products of life. (Beware asking Arthur C. Clarke about that; he'll start doing magic tricks.) There are a couple pulp-era-worthy action set pieces: attacks by alien spiders and monkeys and wild pigs, not to mention a slithering, Lovecraftian tree. These payoffs punctuate a narrative otherwise built on hard science-based descriptions of the technology deployed by the characters, and how it in turn morphs their personalities even as their quest draws them dangerously closer to the sentient squid-critter living, Horta-like, in nacre-lined tunnels, itself alien to the planet underfoot. In a yarn about language and communication, a couple more lines of zippy dialog would have been most welcome, but a superb twist on Ye Olde First Contact trope unfolds in the concluding moments and what at first seems a hard-SF riff on Ted Chiang's Sapir-Whorf ruminations in "Story of Your Life" becomes uncomfortably closer to the biological mechanics of Alien (1979).
Posted by Gilbert Jim at 3:00 PM No comments: