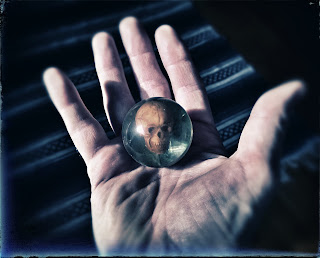 If I were to describe to you a writer who did the bulk of his work in the early half of the 20th century, attracted the attention of a key editor, garnered a small but devoted audience during his short life but ultimately died broke and out-of-print (though his work outlived him, reemerging in the latter half of the 20th century, leading to canonization and reverence) you'd probably assume I was describing F. Scott Fitzgerald.

Born in Providence RI in 1890 and a resident of greater New England until his death in 1937, Howard Phillips Lovecraft published exclusively in pulp magazines: Weird Tales, Amazing Stories, Home Brew, and others. His stories, essays, and poems were well received in this format and won him choice followers and correspondents (among them Robert Bloch and Robert E. Howard), but he never saw his work collected in book form. Following his death, fellow writer August Derleth founded Arkham House publishers in 1939 for the sole purpose of bringing Lovecraft into hardcover print.

Lovecraft's weird fiction has been creeping into our literary consciousness ever since; he is now considered the primary architect of modern horror. The early Arkham volumes eventually begat a handful of popular mass market and trade-sized paperbacks from Ballantine's science fiction imprint DelRey. But the contents of those books were taken from older, corrupt forms -- pulp magazine reprints that had been indiscreetly chopped by editors seeking to fit the stories into available space. Beginning in the 1980s, Lovecraft scholar S.T. Joshi began painstakingly restoring the texts for Arkham House, using original manuscripts.

Joshi's revisions are newly showcased in the Penguin Classic editions of The Call of Cthulhu (1999), The Thing on the Doorstep (2001) and The Dreams in the Witch House (2004). These books comprise most of what Joshi dubs HPL's "major fiction." The first two volumes feature tales of cosmic horror culminating in the novellas "The Case of Charles Dexter Ward" and "At the Mountains of Madness" while the latter volume is built more around Lovecraft's early penchant for phantasmagoric ramblings (he was chiefly inspired by fantasist Lord Dunsany and the poetry of Poe before finding his own voice). While Lovecraft's narrative sojourns into a psychedelic dreamland do have their pleasures, it is his horror and the philosophy behind it that paints his ultimate legacy.

Lovecraft's medium of choice: Alien Terror. War of the Worlds, masterpiece that it is, represents a tinker-toy version of HPL's cosmic philosophy; indeed, Wells's Martians are downright cuddly compared with what Lovecraft had in mind. In his universe, mankind is but a germ, at the mercy of eminent larger forces we cannot hope to comprehend. These so-called "Mythos" stories (though HPL was always adamant that his fictions were unconnected) are populated by a group of so-called Elder Gods and Old Ones who exist beyond the knowable barriers of time and space, though they do sometimes take shape in our reality; his narrator characters stumble across one or two pieces of arcane information (evidence of these "gods") that send them on giddy academic quests towards a truth that is, ultimately, a horror. Despite this cosmology, Lovecraft was not interested in depicting typical forms of morality, of Good v. Evil. There are no supreme gods or devils with their attendant dogmas, only bad choices on the part of the curious humans. The maxim from King Lear to them applies: "As flies to wanton boys are we to the gods; they kill us for their sport." That is, when they notice us at all.

The undisputed Big Daddy of these stories is "The Call of Cthulhu," a tale involving the discovery of a statue bearing cryptic inscriptions, and subsequent investigations into a voodoo-like cult in Louisiana and the sinking of a boat off the Australian coast by a hideous creature that arises from the deep. With "Cthulhu," Lovecraft perfected the quasi-reporter/historian/scientific storytelling technique that would serve him the rest of his career. Lovecraft understood how critical verisimilitude is for the weird tale better than his contemporaries, and better than most who have come after. Only Stephen King, who spends whole chapters weaving convincing internal lives for his characters, comes close. Perhaps critically, Lovecraft leaves no pauses for irony or comedy (a sticking point for some critics, who contend that a little levity would have taken Lovecraft a long way); thus invested, he drags the reader toward agnostic punchlines that may reveal little or nothing (the narrators, confronting unspeakable horrors, are often reduced to madness).

Other of Lovecraft's stories, such as "The Shadow Out of Time" and "At the Mountains of Madness" -- a short novel chronicling the discovery of an ancient Antarctic alien city -- represent similar variations on this theme (and provide templates for such modern horror as Neil Gaiman's American Gods and The X-Files). HPL also explored ramifications of the alien "Elder God" influence on humans who wrongmindedly seek power through them in "The Dunwich Horror" and "The Thing on the Doorstep." In these tales readers find the many references to Abdul Alhazred's evil volume The Necronomicon, arguably the most famous non-extant book in all of literature. HPL fabricated a tongue-in-cheek "history" of the book in 1927, and belief in its existence outside his stories has flowered ever since, due in part by Lovecraft citing it in association with other well-known if archaic tomes like The Sceptical Chymist and Hermes Trismegiste.

Most of Lovecraft's stories take place in an achingly detailed, shadow-draped corner of New England: those rural provinces surrounding Arkham (Lovecraft's fictitious stand-in for witch-haunted Salem). Elements from "The Colour Out of Space" and "The Picture in the House" evoke a backwoods dread on par with anything from Dickey's Deliverance, even as the landscape comes -- literally, in some cases -- alive. Rounding out Lovecraft's atmospheric Colonial Yankee oeuvres is the short novel "The Case of Charles Dexter Ward." If you're hungry for Grand Guignol horror, "Ward" has everything you're shopping for: black magic, vampires, séances, zombies, spirit possession, and finally the requisite god-like alien entities who stand to destroy all.

Each of the Penguin Classics volumes comes with a typical scholarly apparatus of endnotes. Joshi has done far more than recall Lovecraft's seminal intentions: he amplifies the autobiographical echoes buried in the tales, and impressively reveals historical minutiae. "Ward" is peppered with obscure but contextually correct place and character names, all of which are defined. Also helpful are the cross-references to characters and "Elder God" entities who are named (or Unnamed as the case may be) throughout the Lovecraft canon; Joshi sorts them all out while explaining Lovecraft’s inspirations. Especially fun are the dissections of Lovecraft's faithful descriptions of Boston's North End and the routes of the Green Line trains, all of which add to the ghoulish verisimilitude of stories like "Pickman's Model."

Sure, Lovecraft has his follies. There is scant psychology (excepting gibbering madness) in his stories, and no romantic interests. His racism, though submerged, cannot be ignored any more than Cthulhu's own sunken throne. And many of the stories begin with the now-hackneyed "I will tell you my tale, though you may think me mad" approach. Even so, there is an addictive potato-chip quality to Lovecraft's stories. Once his cadence takes hold in your brain, you're apt to keep reading and reading and reading. This is a trait Lovecraft, a good storyteller above all else, shares not just with fellow horrormeister Poe, but with writers who were his contemporaries: Nathaniel West, Gertrude Stein, and Raymond Chandler.

HPL wrote while the Victorian ghost story faded as the dominant form of supernatural escapism and weird/science fiction (eventually popularized for mass audiences by Rod Serling) began rising to take its place. That his work appeared mainly in the pulps of the day has been one reason for Lovecraft's slow acceptance; another is that his work is unabashedly pure genre, and his philosophies cannot be extracted from their presentation. Only one other author comes to mind as one so embraced by readers yet deflected by critics and academics: Tolkien. Much like Tolkien, Lovecraft employs rich, rococo language to set his moods, pacing, and atmosphere, even to contextualize his message. This is purple prose elevated to an art form. This is over-writing with teeth. And because of his baroque, hypnotic skill, Lovecraft gets away with what so many others cannot; only Hunter S. Thompson has more failed imitators than HPL. Contemporary genre writers, willing to acknowledge Lovecraft's pervading influence on modern horror, are reticent to laud or even acknowledge his writing chops. Laura Miller, writing for Salon, called Lovecraft "American literature's greatest bad writer." Still, Stephen King, while accepting the Distinguished Contribution to American Letters medal at the National Book Awards a couple of years ago, asked critics whether they believe they "get social or academic brownie points for deliberately staying out of touch with your own culture." He was speaking in his own defense, of course. But he might well have been asking the question on behalf of Lovecraft.

Now, the prestigious Library of America added Lovecraft to their curation of "America's best and most significant writing," with Lovecraft: Tales (2005). Edited and notated by Peter Straub (based on the Joshi texts), this compendium represents, in 800 pages, truly the best of Lovecraft's efforts, concentrating mainly on the "Mythos" tales. Every disciple will bicker over omissions, but Straub has undeniably put together the best single-dip of Lovecraft currently on the market, better even than Derleth's original Arkham House volume, The Outsider and Others.

From beyond the grave, the self-styled "Old Gentleman" from Providence does seem to be getting his due.

Originally published in the Mobile Register, October 30 2005
Posted by Gilbert Jim at 2:00 AM