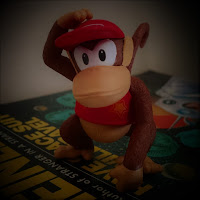 Merian C. Cooper’s original blockbuster wowed audiences not relatively long after motion pictures added sound – a 50-foot gorilla flossing with tropical islanders and smashing up New York City kept the box office humming in 1933. A generation later, schlockmeister Dino DeLaurentiis proclaimed that everyone, including “intellectuals,” was “gonna love Konk,” and “when the monkey die, people gonna cry.” But the only sobs punctuating the end of King Kong (1976) were those provided by suckers who paid full ticket price: ‘twas ineptitude killed the beast.

Peter Jackson’s stupendous re-imagining follows Cooper's story beat-for-beat, often with relentless faithfulness (just one thing sorely missing: that subversive little moment when Kong tickles his gal-pal Anne and then sniffs his fingers). The story is wisely kept a period piece (sparing viewers the sight of Kong climbing a Verizon cellphone tower or whatever), albeit contemporarily embellished and expanded, finally undone by just that much overindulgence. Jackson and his digital SFX shop, WETA, had already upped the ante on Cooper-scale spectacle with The Lord of the Rings (2001-03) so there was nowhere to go on Skull Island but over the top – waaaaay over. Even at three hours, the film isn’t overlong so much as overripe: witness the ridiculous brontosaurus stampede, in which all the major characters miraculously escape being turned to jelly; verisimilitude isn’t just strained, it’s willfully exploded, even by summertime popcorn-flick standards. On the other hand, there’s a surprisingly genuine emotional quotient for a monster movie: Naomi Watts and Andy Serkis breathe real life into the relationship between Anne and Kong. By the time Kong escapes into the larger manufactured trap of NYC, only the hardest of hearts would not empathize -- helpless and lonely (even with his favorite lady in tow), confused by his alien surroundings, and doomed by that very confusion. Lethal beauty, indeed.
Posted by Gilbert Jim at 12:00 AM