Sing a Song of Bradbury 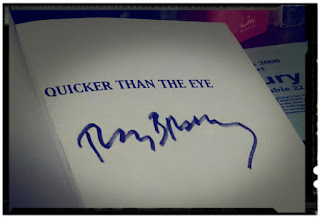 On the fifth of June, in this Our Year of Predicted Apocalypse 2012, the planet Venus -- guiding light of ancient mariners, namesake of love goddesses from all cultures, bright twinkle making her the celestial object most often mistaken for a UFO -- transformed into a pinhole shadow while traversing the surface of Sun. Under cover of this rare astronomical event, Ray Bradbury -- usually associated with the redder, colder, farther planet of Mars -- slipped forever from our own surly Earth.

Though he will likely always be shelved as such, Bradbury never much cared for being labeled a "science fiction author." This was a misnomer from the start, applied by Doubleday at the release of The Martian Chronicles in 1950. Fair enough for that book, but even by then Ray had moved from the genre-driven pulps to the "slicks," including a special Halloween edition of Mademoiselle built around his short story "Homecoming," not to mention four appearances in the Best American Short Stories anthology series (thrice with stories not of rocket ships but of racial strife). And as anyone who reads beyond the title knows, Chronicles isn't really about Mars: it's about exploration, ambition, the folly of human desire -- the burgeoning space-age was merely a handy metaphor. And Bradbury examined far more than Mars over the course of his 50-year career. No matter the locale -- romantic, foggy Ireland; quirky but bitterly divided Mexico; Civil War battlefields; China circa 400 AD; his own Rockwellian, fictional Green Town, Illinois -- he mostly charted another striated, romanticized crimson landscape: the Human Heart.

After receiving the National Book Foundation Medal for Distinguished Contribution to American Letters in 2000, Bradbury got busy refocusing the lens on his long career. As part of that process, Sam Weller's authorized 2005 biography, The Bradbury Chronicles, goes a long way, cataloging Ray's disparate achievements. His work appeared in decades of publications ranging from Captain Future and Weird Tales to The Saturday Evening Post and Redbook. Commissioned by John Huston to write the screenplay for Moby-Dick. Winner of the 1968 Aviation-Space Writers Robert Ball Memorial Award despite having never flown in a plane (though he eventually did fly after the age of 60, Bradbury steadfastly refused to learn to drive). Friendships with Alfred Hitchcock, Christopher Isherwood, Ray Harryhausen, Aldous Huxley, Forrest J. Ackerman, even Walt Disney (for whom he wrote the original voice-over narration for the Spaceship Earth ride in EPCOT). A fistful of Cable Ace Awards for the seven-year television run of The Ray Bradbury Theater, itself primed by years of work in radio and theater, including his own Pandemonium Theatre Company. Not bad for a wide-eyed kid who once stood on Hollywood sidewalks, hawking newspapers to movie stars.

Equally important to this legacy was the assemblage of Bradbury Stories, a companion for the older The Stories of Ray Bradbury. Over the course of his career, Bradbury published over 600 tales; these two volumes taken together showcase a third of that output, and are a perfect jumping-in point for someone just discovering his work. Even then, the new will seem warmly (if strangely) familiar: the pages bubble over with motifs and storylines that have been either formally adapted or outright stolen to fuel an untold number of films, television and radio shows, comic books (including many issues of Tales from the Crypt and episodes of The Twilight Zone -- to which he surprisingly contributed only one official script, being deeply dissatisfied with the resulting episode). Tellingly, Bradbury Stories reaches page 125 before yielding a bona-fide sci-fi story, and even then it's a chapter from Martian Chronicles.

Still, his most resonant and probably most widely read work is the one that looks most penetratingly into the future: Fahrenheit 451. Though he was essentially rejected by sci-fi's hardcore community for not engaging in harder science, few of its other citizens turned in work so socially prescient: the prevalence of advertising; the numbing escape of reality programming; the easy distractions of prescription drugs; false news as entertainment. It's easy find a censorship message, given the book-burning "fireman" career of the main character, Montag -- but as his boss, Chief Beatty, explains: "Cram them full of noncombustible data, chock them so damned full of 'facts' they feel stuffed, but absolutely 'brilliant' with information. Then ... they'll be happy. Don't give them any slippery stuff like philosophy or sociology to tie things up with." Beatty isn't talking about an imaginary, totalitarian future, but about our Here And Now. 451 isn't about a society sadly, unjustly deprived of books. It's about a non-reading society that couldn't care much less about books or reading -- in any format.

As Weller has it, Bradbury used fiction to predict the past while staying nostalgic for the future -- a seeming impossibility that yet perfectly sums up the man's outlook. Indeed, to read Bradbury is like sitting on the porch of a twilit summer evening: soon the golden leaves will tumble like nature's confetti, but for now, move to stand barefoot on the new-mown grass, cool as a shadowy woodland stream. Listen to the metallic wail of cicadas in the fading cotton-candy light. Watch your shadow dissolve behind you and know that if you keep enough love in your heart, you will Live Forever.

________________________________
Does the blood move in your hand, does that hand move to touch metal, does that metal move to touch Space? Do wild thoughts of travel and migration stir your soul? They do. Thus you live. Therefore God lives. You are the thin skin of life upon an unsensing Earth, you are that growing edge of God which manifest itself in hunger for Space. So much of God lies vibrantly asleep. The very stuffs of worlds and galaxies, they know not themselves. But here, God stirs in his sleep. You are the stirring. He wakes, you are that wakening. God reaches for the stars. You are His hand. Creation manifest, you go in search. He goes to find, you go to find. Everything you touch along the way, therefore, will be holy. On far worlds you will meet your own flesh, terrifying and strange, but still your own. Treat it well. Beneath that shape, you share the Godhead.
-- Ray Bradbury, from Leviathan '99
Posted by Gilbert Jim at 10:00 AM