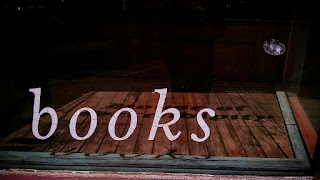 I used to tear books in half for a living. Managing inventory for an indie bookstore during the 1990s, one of my tasks was "stripping" the mass market paperbacks. This entails, for those not in the trade, ripping the front cover off to return to the publisher in exchange for credit, then tearing the book in half (or into thirds or quarters, depending on the thickness of the tome) and trashing/recycling the remaining paper. I was often asked, Aren't you disturbed on some level, destroying all those books? Answer: Yes, I am disturbed on some level, but it's not from destroying all those books.

You might try and excuse this blasphemy by saying, well, they weren't sacred texts. It was a lot of unsold Danielle Steele and Zane Grey and Margaret Truman and Allan Folsom and Robert James Waller. But I'd rip up classics as well as over-ordered bestsellers -- not all those high school kids pick up what they need for Required Reading, after all, and there was no reason to keep stock of an extra 200 copies of The Awakening until the next fall, not when we needed credit for twelve cases of the new John Grisham novel, due to land come springtime.

That's how the book business works: We got only so much room for only so many books.

As of this writing, my library is comprised of just over 500 titles. (I know that number because, being disturbed on some level, I grabbed a cup of coffee and spent a couple-three minutes doing an inventory count, just like in the old days.) This is as small as my collection has been in many years. I reduced it significantly prior to our move to Birmingham, by somewhere in the neighborhood of forty percent, weeding out books I'd read decades prior, or might not read until decades hence, or might not read ever. It wasn't an entirely painless process, I will admit. Then again, neither was moving. We're talking four flights of stairs, here. Halfway through the day, I found myself wishing: If I knew which boxes my Really Treasured Books were in, I'd set the rest on fire, right down there in the street in full view of God and everybody, and only call the firemen to hose the ashes into the sewer.

My library has routinely expanded and contracted by way of constant acquisitions and occasional purges. I've tried to keep my collection bound by available shelf space, but this hasn't always worked; books tend to end up here and there, in decorative piles. But the purges accomplish more than clearing floor-space: as a dedicated apartment dweller, I never assumed permanence. Meaning, at some point, all that stuff has to be picked up and moved again, so why have more than I'm willing to carry? It's not so much about shelf space as it is about life space.

My sister Dena taught me to read when I was four, using Heckle & Jeckle comic books. (I disliked being read to, wanting instead to read for myself -- a characteristic I still have, pretty funny from a guy who came up with Southern Writers Reading as the eponymous title for an onstage literary event.) I was the unofficial class librarian throughout fourth grade, each week quickly raising my hand to volunteer for the task of dusting and tidying the industrial metal bookshelves that lined one wall of our classroom. I majored in English for five years, then found work in bookstores for the next thirteen -- and frankly got a much better education, taking home books about social and scientific theories, religion, histories, biographies, even a bit of literature now and then. I am, in short, no stranger to the joys that books provide.

I used to assume that a healthy personal library had to be a steadily growing thing -- it was a physical manifestation of the owner's mind, or at least a window into it. Books in that sense were trophies of achievement, each shelf the equivalent of a sheepskin certificate, even if it was only from the School of Nurse Romances. A library was evidence of the worthwhile shape of your life, and the more you had, the better, the faster, the smarter. But as somebody who hasn't lived in one particular place for more than a handful of years, my practical need to purge physical objects outweighs any urge to showcase what I've read in the past in order to perhaps prove to visitors that I can carry on an interesting conversation (because I often can't, anyway).

Buddhist monks spend hours, days, weeks creating those intricate mandalas out of colored sand, only to brush them away (ceremoniously, but still) after they finish. So, I wonder: What is this library but a multicolored mandala, a dreamcatcher, a skein of flexible ideas grouped here only temporarily, in this form, before again taking to the wind? Why hang onto books? Why even try? When Sonny Brewer and I were chasing dollars with used and rare tomes at Over the Transom, we'd occasionally receive a beloved copy of something, like that first state edition of To Kill a Mockingbird, or that full collection of Lafcadio Hearn's Japanese ghost stories -- and as tempting as it was to keep such things for ourselves, we had a great notion: we were only a temporary transit lounge. We were just keeping those books until their rightful owners came to collect them. We loved them, but we also loved seeing them go. (That is, after all, another way in which the book business works.)

At the end of Fahrenheit 451, there are almost no books left in the world, only people who remember those books. But it is more than memory, it is life itself. I am Plato's Republic, says one character, introducing others: I want you to meet Jonathan Swift [...] and this other fellow is Charles Darwin, and this one is Schopenhauer, and this one is Einstein, and this one here at my elbow is Mr Albert Schweitzer. And so do we all become Spartacus, one book at a time.

I suppose it all boils down to a rephrasing of an old cliche: When I croak, I won't take any of these books with me. I'll only take what I've read. And what a gift that will be.

[This was a response to The Wily Blogger who will, I hope, one day reinstate her wily blogging.]
Posted by Gilbert Jim at 12:26 PM