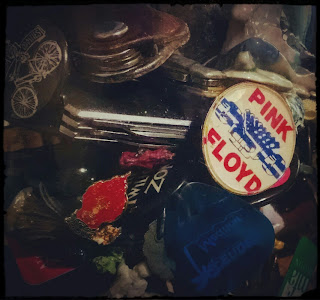 Pink Floyd's final studio offering is a resurrection of ideas abandoned in 1994, when The Division Bell was cut down to a single album from earlier plans for a double: lyrical songs on one disc, instrumentals on the other. Traditional songs won out, the ambient scraps went to the archive, a casualty of band apathy, yet soon to spawn Internet rumors such as the April Fool's joke of 1997: a surprise release entitled Liquid. Which, dated jibe against Roger Waters aside, still wouldn't be a bad title for what eventually trickled down as The Endless River. (Equally, this could have been called Son of "Marooned," an instrumental from Division Bell, which a fair share of this record resembles, production-wise when not also musically.)

Divided into four musical suites (designated as untitled "sides," moot on any format other than vinyl), River is a mercurial, career-spanning showcase of Floydian techniques, gimmicks, signatures, and moods. Richard Wright's previously recorded keyboards are augmented by new guitars from David Gilmour and drums from Nick Mason with an eye towards arranging all the like pieces together. The soundscapes are languid and droning, here and there working up to a dark, sultry pulse, occasionally even a burst of actual, driving rock, all rich with Floydian callbacks (though with fewer-than-usual sound effects, more stretches of ambient weirdness). It doesn't take a careful listener to hear a luxurious mashup of "Shine On You Crazy Diamond" and "Welcome to the Machine" in the album-opening "It's What We Do." Both "Allons-y" and "Surfacing" sound like they were developed from musical sketches cut from The Wall. In fact, much of the album seems to have been scrambled in a time machine: witness a 1968-era Wright on the Royal Albert Hall's pipe organ, a whirling, majestic ghost playing an overture for the Afterlife. Meanwhile, the percussive "Sum/Skins" is Nick Mason getting his joyous drummer freak on for the first time since Ummagumma. And "Eyes to Pearls" finds Gilmour teasing up a suitably murky surf music riff (the man has locked within him the Greatest Surf Rock Album Yet Made, and the 1970 Casino Montreux performance of "Atom Heart Mother" provides the better evidence). Point is, you're looking for a hit or two of Floyd, you've come to the right place.

While far from the first time the hands controlling Pink Floyd have cobbled dusty material into fresher shape, call it inherent vice, this time around not everything works. "Anisina" is a corny, misguided foray into late-1970s Yacht Rock. "The Lost Art of Conversation/On Noodle Street" will appeal most to those who have been waiting for the Floyd to retro-score a Film Noir. There are dead spots, places that don't quite seem to have thawed after two decades on ice (in the name of being Ambient Music, one must suppose). Gilmour's stinging Ebow guitar effects can be more annoying than evocative, an alien bee piercing the sonic siesta. And let's remain silent about the lyrics to "Louder than Words."

One thing bound to be endless about this album: arguments among certain sections of the Floydian fan base regarding whether or not it constitutes a suitable Final Statement from a brand name known for Making Statements. (Not to mention legitimate, that's a whole other can of worms you have to wait for.) Gilmour has made clear, the album is a tribute to Wright, a reminder of his foundational role in the band's sound. Beyond that, expectations for a profound (or even coherent) message will lead only to disappointment; by design, the music is too adrift for that. But as an hour-long bonus track, some lagniappe, a simple coda to a long and ridiculously varied rock career, it absolutely has moments that serve well enough. The curtain went down (and some time back, if you didn't notice), the lights are up, here's a mixtape to play you out the door.

When lyricist/bassist Waters left the band in 1984 to pursue a solo career, a fair number of people, myself included, assumed that was the moment the curtain fell on Pink Floyd. It was too bad, but the angry, articulate The Final Cut made an admirable headstone. Which, three years later, made A Momentary Lapse of Reason the abomination that crawled out from under that headstone. Prank Floyd to some, Pink Fraud to others, David Gilmour and all his hired hands had no business hijacking the prior artistic achievements of Roger Waters, fooling everyone into thinking they were the same band that released Dark Side of the Moon, dammit. Especially not when Waters had apparently asked them nicely please not to do so, right before broadcasting Radio KAOS to an uncaring world.

Thanks to natural sentimentality for a more youthful time, I'll always have a soft spot for KAOS, a sore spot for Lapse, though both are profoundly flawed (experiments in "modernizing" the classic sound now provide hard evidence that all parties forfeited the title deed to Pink Floyd during that long, chilly season of Reagan/Thatcher). As the 1990s dawned and lawsuits settled, both camps returned to proper sonic form, Waters with Amused to Death, Gilmour's Floyd with Division Bell. Waters' album is a sprawling complaint about War as Television Programming, released shortly after the first Gulf War; by turns vicious and tight, then baggy and incoherent, but always mesmerizing and challenging, it is essentially his solo follow-up to The Wall. A loose meditation on miscommunication, The Division Bell is a more relaxed and genuine release than its predecessor, serving to remind listeners (far better than Lapse ever could) Gilmour/Wright/Mason were more than mere sidemen to Waters and his concepts; he was undoubtedly the Direction, but they were equally undoubtedly the Vehicle.

When finally computer-capable of such trickery, I forged a mix CD from both efforts. With Roger Waters ranting and David Gilmour wailing and the filler jettisoned: Behold! a lost Pink Floyd album! (albeit one without a pop-up theme, more like one of Floyd's early soundtracks, perhaps). Death By Division stayed in prolonged heavy rotation -- long enough to refreshingly exhaust my long-time listener's interest in the Waters/Gilmour feud. Direction and Vehicle might no longer be in tandem, but, never mind, I'm just a guy with a pair of headphones, no dog anywhere near the actual fight, able to read the album credits and appreciate what I'm listening to accordingly. As I am one of those fools (numbering in the millions) who will tell you how Pink Floyd has been a steady soundtrack to his hilarious life, it was a revelation: my love of the musical structures assembled by these former architecture students didn't have to be attached to their stupid personal problems. (Besides: didn't I already have enough stupid personal problems of my own?)

I turned with renewed interest to the younger incarnation of the band, which I'd never given more than academic attention, sticking more to the refined, anxiety-charged Waters-led Floyd (read: from Meddle to The Final Cut). The band's over-romanticized Big Bang, the short, sweet, psychedelic Syd Phase, quickly gives way to the wandering Prog Phase: transformative late-60s experiments which the band had wholly disowned (at least until the release of the Early Years box material). Darker and heavier cosmic dust-ups prevailing, personified in official releases chiefly by Ummagumma and Atom Heart Mother, fulfilled by the nebulous warmth of "Echoes," this era is arguably best experienced via scattered media of vintage live performances of Floyd as a living band: engrossing sets of existing but expanded material arranged as new conceptual narratives, The Man and The Journey, not to mention the smooth, surf/acid rock band-only versions of the "Atom Heart Mother" suite (which trump the recorded Ron Geesin version, overstuffed as it is with harsh, brassy horns and silly, gulping choirs). The Live at Pompeii film captures the band in a moment of literal transition, performing material from Meddle and prior while also recording Dark Side of the Moon. The well-known Classic Floyd Phase begins with the shamefully under-appreciated Obscured by Clouds (which could serve as an album-length B-Side to Dark Side) and ends with the infamous Montreal spitting incident during the 'In the Flesh' tour supporting Animals. The 1978 release of David Gilmour begins the prevailing Solo Phase, wherein certain individuals are more obviously in control of whatever Floydian Project is in question than are certain other individuals, and in which (most) solo albums and touring projects can be considered canonical.

With everything in that kind of relief over such a diverse body of work, worrying about who likes to work with whom, who has the more obnoxious ego, and therefore whether or not some albums/tours are more legit than others, just takes time and energy away from actually loving the music -- and I had discovered I loved all those early moods and wild band explorations just as much as I loved the later, more deliberate, more focused song cycles. Because, ultimately, far as I'm concerned, they are all part of the same weird body of work from the same weird musicians. Imagine those Alien Anthropologists exploring a post-human Earth at the end of "Amused to Death" -- without a troubling context of band drama, just the catalog of work itself to experience, could they somehow conclude Waters parted amiably for his preferred solo career, perhaps even blessing Gilmour & Company on their intention to continue, best they could, as Pink Floyd? That, subsequently, everyone made a couple-three missteps but eventually found even keel, peace with their choices, satisfaction with their careers? How different would that music sound to those ears, as opposed to ears that have also heard all the ego-driven bickering? According to the resounding successes, in both artistic and commercial terms, of the recent legacy-claiming tours of both Gilmour and Waters, "Pink Floyd" persists, just in its component parts rather than completely assembled. (In 2007, I watched Roger Waters and his crack surrogate band burn through an amazing performance of The Dark Side of the Moon. A year later, I sat stunned by the Gilmour/Wright-led "Echoes" performance on Live in Gdansk, the final haunting six minutes of which is quintessentially, beautifully, inevitably Floydian. Once all the chatter is shut out, best as I can tell, wherever those guys go, whatever they call it, Pink Floyd follows.)

Beats, bars, rhythms, movements, moods -- music is a form of mass communication more flexible than language in that it transcends all culture, appealing to sheer, universal emotion more readily than to rational, organized thought. We feel connected to it; it is part of us, sacred, the joyous noise of the cosmos we are luckily attuned to hear. As younger people, we identify ourselves to others by our musical tastes, finding the beat of our true tribe. Or, by chance two separate glances meet, and I am you and what I see is me, as Roger Waters once put it.

Even before the release of The Endless River, it was prejudged in some corners for not including a Waters-penned lyric. Responding to such confusion with "Get a grip," Waters, sounding more characteristic of his old Wall self than his new Wall self, pointedly reminded everyone that Gilmour and Mason constituted the band, and were free to do whatever they wanted. Coming from a man just off a three-year long, record setting, award winning, career culminating tour of an updated Wall show, it was an unnecessary statement, and therefore sounded bluntly conclusive -- even more so than his recent admission of having been wrong in obstructing Gilmour/Mason/Wright in the first place.

If Gilmour's primary heresy in continuing Floyd can be said to be based on the attempt to maintain the conceptual, lyric-driven Floyd perfected by Waters rather than focusing on his and Wright's and Mason's instrumental strengths, their trademarked sound as a trio of musicians (Gilmour had admittedly been playing bass on Floyd albums for years), then with the majority of The Endless River he has at last genuinely steered the Floyd brand according to his own abilities. As was the case with The Final Cut, too bad it'll be the last. (Dot, dot, dot.)