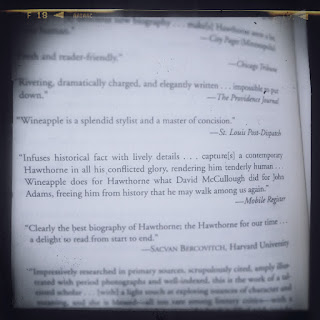 Few of the personages of past times are anything more than mere names to their successors. They seldom stand up in our Imaginations like men. Nathaniel Hawthorne wrote these words in his early bio-sketch of Sir William Phips, governor of Massachusetts from 1692-95. But in our living years, the sentiment could well be self-applied by the author, particularly in regard to James Mellow's 1980 biographical treatment Nathaniel Hawthorne in his Times, a comprehensive and encyclopedic work, essential as a reference but most often a cold and dark reading experience, with few visible details.

A license must be assumed in brightening the materials which time has rusted ... fancy must throw her reviving light on the faded incidents which indicate character, whence a ray will be reflected, more or less vividly, on the person to be described. Following this charge, Brenda Wineapple provides the recently published Hawthorne: a Life, which infuses historical fact with lively details. But rather than resort to fancy, she makes liberal use of extracts from letters and journals, enabling the easy-flowing narrative to reach back and capture a contemporary Hawthorne in all his conflicted glory, rending him tenderly human as the musing, frustrated author of tales and novels that have aged and grown beyond the scope of any life he could imagine -- and he was capable of imagining quite a lot.

Born on July 4th, 1804, in bustling, "self-obsessed" Salem, Hawthorne divided his childhood between the city and a wooded family estate in Maine. There, finding more happiness in isolation, he began the habit of deliberate extraction from the mainstream of society that would continue throughout his life. Sent back to Salem for schooling, Hawthorne injured his foot and hobbled for over a year, refusing at times even to walk; this telling, self-punitive rebellion allowed for secluded self-education: "Instead of pursuing the ragtag parade of schoolboys with muskets, Nathaniel could study ... lying at home on the carpet, where he built a house of books for the cats."

Following education at Bowdoin College (classmates included Horatio Bridge, Henry Longfellow, and lifelong friend Franklin Pierce), Hawthorne entered a state of jittery suspension; he secretly longed to pursue a life of the mind, and scribbled accordingly, though plagued by reservations: Authors are always poor Devils, and therefore Satan may take them. As Wineapple points out: "Idle, ambitious, and damned either way." It seems almost ridiculous to contemplate, that the man who would write the first great American novels would be so reticent and unsure of his own talents: I shall never make a distinguished figure in the world, and all I hope or wish is to plod along with the multitude.

This grapple between the demands and responsibilities (both perceived and palpable) of employment, and the less-restrictive observational life of an author continually vexed Hawthorne. Wineapple points to this struggle as the best explanation for his otherwise confusing decision to toil at Brook Farm, the famed Transcendentalist commune, for most of a year, despite his non-commitment to (and sometimes downright derision of) the founding principles. He was more interested in buying himself time to write, and in working to provide a comfortable, stable home for future wife Sophia, in hopes of ending their protracted, secret engagement. (Hawthorne was thirty-eight before they finally married -- "middle-aged" if not frankly old by the standards of the day.)

The major periods -- idyllic life in Concord & greater New England as husband and author, friend to Thoreau, literary guru to Melville, and cagey associate to Emerson; frustrated life in Salem as Customs Officer (cut abruptly short by political maneuvering); twilight life in Europe as government emissary and disconnected literary lion -- constitute the bulk of Wineapple's extrapolative attentions. Seen as socially demure (or taciturn and diffident depending on the reports, one of which has him ducking behind trees to avoid speaking to passersby) Hawthorne shied from putting himself forward with strangers but was warm and open when comfortable among friends.

(For contrast, a more tender, surprising view of Hawthorne can be found in the recently published Twenty Days with Julian and Little Bunny by Papa, an extract from his journals, accompanied by a terrific introduction from Paul Auster. With Sophia and the girls off visiting family, Hawthorne was left alone for three weeks with his five-year-old son. The account of this time -- the endless childhood questions, the forays into neighboring Shaker communities, and typical domestic crises -- is nothing less than a precise snapshot of early fatherhood, and delivered in language crisp and quick, not what is generally expected of Hawthorne.)

Meanwhile, his vacillations between public, salaried appointments and reclusive turns at authorship became more pronounced; at one point, Wineapple explains: "He said he couldn't compose fiction because, working for the government, he felt he no longer owned himself; but... Hawthorne held on to his government job not just because he needed the money or because the country ignored its artists, but because he liked it." Yet just a few years later, during the period that produced The Scarlet Letter, Sophia reports "He writes immensely. I am almost frightened about it". (Hawthorne himself more coldly -- though correctly -- characterized his spotty output: A life of much smoulder, but scanty fire.) And finally, Wineapple boils it down to: "Hawthorne needed the consulship as much as he needed to write ... writing meant everything to Hawthorne and yet cost everything. It was his heart of darkness, an isolation no one could fathom or relieve; it was a source of shame as much as pleasure and a necessity he could neither forgo nor entirely approve."

Perhaps most troubling to modern audiences are Hawthorne's ambiguous views of slavery and emancipation, and Wineapple is careful to reveal these within context. Hawthorne banked his later employment upon his friendship of (and thus the political policies of) Franklin Pierce, a man often blamed for contributing (via ineptitude) to the instabilities that led to the Civil War. To that end Hawthorne extended his loyalties, perhaps over-extended them; there is some evidence that he simply did not give the matter much thought beyond providing the opinions that were expected to tow the party line. Though he despised the slave trade, he also opposed emancipation -- a tricky stance, and one that earned him a good deal of criticism in his own time. Yet there is no doubt: the fighting of the Civil War, which he did not live to see the end of, broke his patriot heart: I hear the cannon and smell the gunpowder through everything.

Ultimately, Wineapple does for Hawthorne what David McCullough did for John Adams -- freeing him from history so that he may walk among us, again. It's a clear, populist approach, a daguerreotype in narrative, devoid of criticism or speculation. Yet, just as it is impossible (also, worthless) to render the life of a politician without discussing his politics, so it is with a writer and his work. Wineapple utilizes Hawthorne's fiction as an overlay for crucial moments in his life, deftly mapping parallels and intersections but without crossing into shady realms of sheer speculation. The works are dissected not for literary merit, but for humanistic evidence. Declining the role of critic, Wineapple concentrates more on what the stories might have meant to Hawthorne, less on what they might mean to an audience. And just as well to draw on this record -- Hawthorne was notorious for covering his own historical tracks, burning letters, manuscripts, journals, and begging friends and associates to follow suit. As he wished, his fiction stands as the testimonial to his life and thoughts; we are thus obligated to listen to it.

Stemming from a man so obsessed with shameful, suspicious legacy -- particularly his own harsh Puritanical ancestry -- it is tempting to note (though one must enter willfully into the realm of supernatural speculation to do so) the phenomena of Hawthorne's ongoing reputation and fame. Hawthorne's forefathers publicly flogged Quakers (great-great-grandfather William Hathorne) and presided in the Salem Witch Trials (great-grandfather John Hathorne). Young Nathaniel changed the spelling of his last name to distance himself from their blood, but that wasn't all. He wrote of these dubious achievements, as if to purge himself of a guilt he felt by association. Time and again in Hawthorne's writing, and nowhere more perfectly than in The House of the Seven Gables, the World seeks balance and retribution for wrongs committed, even if reparation must be done in secret, or if those who benefit from it cannot entirely grasp how things have been set right. As physical manifestation of that idea, modern-day downtown Salem (which now does honor the literary son it once drove away in disgrace) would not be recognized by those men who hanged the witches -- the open practice of Wicca, the horror-movie museums and haunted house attractions, and most especially the memorial that remembers the victims of their cruel injustice.

Redemption is the noble goal in Hawthorne's fiction, though it might never be achieved -- still, it is the reaching for that goal that matters most, not the attainment of it. And Nathaniel Hawthorne, via his writing, certainly did make the reach. And now it is more than 140 years since his death; still his name is spoken, and still his face is gazed upon in portraits -- quite the opposite of the anonymous, failed man he wrote of in "The Ambitious Guest." Hawthorne would perhaps be surprised. But who is to deny that some elemental force isn't still repaying him for the gesture -- Sarah Goode, perhaps, smiling down from above in eternal appreciation.

Originally published in the Mobile Register as "Humanizing Hawthorne," December 07 2003
Posted by Gilbert Jim at 2:00 AM