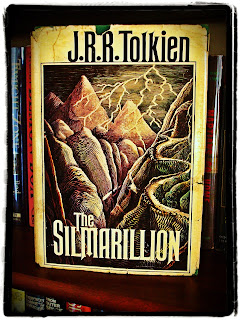 This book is a cornerstone of my library. It's a first American printing, a gift from my brother-in-law Pete, what must have been Christmas 1978, based on the inscription. It looked in better shape as an original gift, but it's always been a treasure to me.

I read both The Hobbit and The Lord of the Rings while in 6th grade, consuming them slowly over a period of nearly a year -- I lived inside each chapter for as long as I could, often reading them two or three times before finally moving forward in the story. While I always had a rich imagination, Tolkien's saga was a turning point for me in realizing that escapism for "grown folks" could be just as immersive and entertaining as the ghost stories and comic books consumed during my first decade or so on the planet. (I'd previously held a dim view of the Harold Robbins and James Michener slogs favored by my father; their titles and covers looked common and dull.)

The Silmarillion was an equal turning point. As a 7th grader, I struggled with the cold, alien structure of this "Middle-earth bible," as well as with the linguistic, and of course mythological, aims of Professor Tolkien, all of which were over my head. I was plenty game, but might have understood more had I simply used the book to smash myself in the face a few times. Still, I finished. I couldn't have explained half of what I'd just read, but I finished all the same.

I did realize two things, even then. First, that even the most fantastical genre tales can have roots in serious intention and theme -- and that is an awesome and wonderful thing. Second, that my duty as a reader isn't always to understand absolutely everything; it's to take away from difficult material what I am capable, at that moment in time, of taking away. Something will be learned, and no work, as Gurdjieff would say, will be wasted.