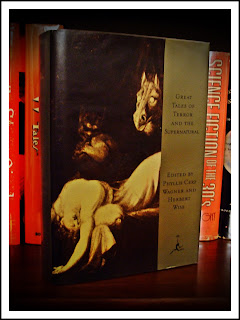 I have crappy retention for short stories. Almost none. Assign me a short story, quiz me about it a year later, I'll flunk. Sometimes I can remember a critical detail (there's a terrible motorcycle accident in the middle; giant ants are on the rampage; yellow wallpaper is involved) but usually nothing specific about the plot. I will often remember if I enjoyed the story, and maybe some of the mood of it; other times even the titles will be totally unfamiliar. It's maddening in its own way.

Then again, silver lining: This peculiar form of Literary Alzheimer's disease means my enjoyment doesn't necessarily decrease with repeat readings. Sure, I've read Edward Bulwer-Lytton's "The Haunted and the Haunters" enough times to have memorized every ridiculous trope, but it feels like a mint ride each time. I am afforded a pleasant, bookish kind of deja-vu. Events unfold off the page, but I don't remember them until after I've reread them -- like waking up from a dream you know you've had before. It's kind of nice. I get to experience something quasi-new while also satisfying the basic human desire for hearing a story retold over and again.

Great Tales of Terror and the Supernatural is a textbook of uneasy numina. Over fifty genre classics from the likes of Hawthorne, Lovecraft, Faulkner, Bierce, Wells, James (M.R., that is). Tiny print covers all 1000 pages. Given my apparent propensity of my brain to jettison short fiction, plus the time it usually takes me to traverse this book from cover to cover, I've joked that this volume would be the only one I'd need for that proverbial Desert Island to which one may only take a handful of favorite things: upon finishing, I could just flip back to the beginning, and start fresh...
Posted by Gilbert Jim at 11:27 PM