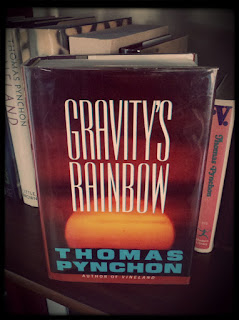 Hardback editions, of any description, of Thomas Pynchon's first three novels are hard to come by. My slightly cocked 1966 Modern Library edition of V. is a trophy collected during my early days at Over the Transom, when rare book searches were our forte, before the existence of ABE and Bookfinder become common knowledge. (It both cracks me up and embarrasses me now that we charged a $15 "finder's fee" for tracking down out-of-print titles, a job that currently takes seconds using Google. Ah, the Salad Days of the Internet, when access to a search engine was a license to print money.) Anyway, circa 2000, most ML copies of V. were selling in the $75+ range. I found mine for under $30 from "a guy who apparently didn't know what he had" -- our phrase for someone anomalously listing an uncommon book for far less than the average going rate. My good luck.

Eariler in the decade, while working at Page & Palette, I picked up what is sometimes referred to as a "second printing" of Gravity's Rainbow in hardback. Vineland had just been released as a trade paperback and, for the first time since initial publication, GR was given a refreshed cover with matching typography. Viking's decision to issue a few new hardbacks with updated jackets must have been off-the-cuff; they didn't bother to assign a new ISBN, standard practice with a reissue and/or new design elements -- hence the "second printing" confusion.

I didn't need a hardback, already owning a paperback with the exact same cover. But I'm a sucker for new artwork, particularly when it offers improvements, and this struck me as both appealingly modern (the original early 1970s design was a sick orange color, to my eye uninspired and certainly stale by the early 1990s) and subtly appropriate: it's the initial bloom not of a sunrise or sunset but of a nuclear explosion, like the one suggested in the novel's closing moments ("I don't think that's a police siren..."). I probably also liked the idea of having a "permanent" copy for the bookshelf. Covers would, after all, come and go (and GR was indeed updated again only a handful of years later, for the Penguin Classics USA edition), but this was a damn keeper.

My mind changed by 1999, however -- when I wanted tickets and travel money to see Roger Waters, then embarking on his first tour since 1987. Given that I'd probably always have quick access to some perfectly usable copy of Gravity's Rainbow, why did I need this hardback gathering dust? To eBay with it! ... I should have known something was up when my reserve of $30 was met within hours. I think I ended up selling that copy for somewhere upwards of $80. More than enough for my ticket, certainly -- and I hadn't even listed my college-era comic books yet. More good luck, or just dumb luck?

I sold quite a lot of stuff on eBay that year -- to fund not only that particular road trip but also my life, in the short term -- but that copy of Gravity's Rainbow was the only thing with which I regretted parting. Particularly since the price it went for signaled to me that I'd unwittingly, stupidly released a treasure. I would periodically check the usual dark corners of the internet, with no luck: the only hardback copies of GR floating anywhere near my price range were ex-library copies, stamped and mauled and missing any jacket whatsoever.

Finally, late in 2005, I tripped upon an ABE listing. Same book, same cover, forty-some-odd dollars, shipping included. Here was a guy who apparently didn't know what he had, same as me, six years earlier. [Perhaps exactly as I had been? ... This book has a front hinge that is cracking, despite an attempted, somewhat botched, repair at the front-end papers with binder's glue -- exactly the sort of repair I'd have attempted on just such a flaw, working late hours in the "engine room" at Over the Transom. And I could almost, almost swear that my given-away copy had just such a problem with the front hinge. Then again, maybe Viking printed cheap copies and they're all prone to that.]

Now if only I could find one of those guys with a first edition copy of The Crying of Lot 49, I'd be all set.
Posted by Gilbert Jim at 10:03 AM