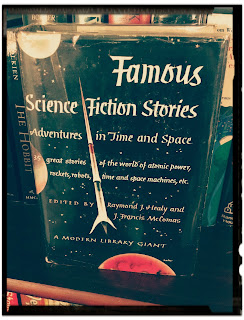 I wandered into my college career with a rough draft of a novel already under my belt: The Stonehenge Connection, a space opera in five "acts," scrawled in cheap black ink across 368 college-ruled pages when I should have been listening in high school Geometry class so that I'd now know how to hypotenuse a triangle, or whatever. The story of an Earthling recruited by a rebellious alien to save his own planet, it was absolutely nothing but a loose bag of cheaply imitated influences -- The Hitchhiker's Guide to the Galaxy, Blade Runner, Doctor Who, Time Bandits -- dropped into a plot worthy of Ed Wood. Then again, I enrolled in Creative Writing with the mere aim of learning how to write better sci-fi and horror potboilers. And I had some hope, early on -- the room where the classes met was nicknamed the "Star Trek Room" due to its being dominated by a gigantic oval conference table. But I don't recall Star Trek ever being discussed, not in a way I found interesting, anyway.

Time travel is a seductive folly partly because we like to imagine there are moments in our lives where, if we could return and intervene, whisper wisdom into the ears of our younger selves, we could avoid losing years to an unnecessary struggle down some errant path. (Also because if you could time travel, you could saddle up a T-Rex, but I digress.) Truth is, I don't recall a singularity wherein my low-key aspirations of being a SF author with a meager cult following imploded. Maybe during a conversation with my instructor, being told I'd rather have the respect of my "peers" and publish in the Paris Review than peddle in Ye Olde Sewer of Genre. Maybe when I switched my major to Philosophy instead, because dabbling in Metaphysics seemed like it might bring me closer to understanding Tom Stoppard's brand of Existentialism. Or when I further shifted to Psychology, finally seeking some hard science about the mysteries of human wetware. Looking back, I think what I mostly did was manifest that old Steve Martin zinger about learning just enough to screw you up for the rest of your life. (I did always think that was a pretty funny joke, after all.)

When I more-or-less randomly grabbed this book for the purposes of mindlessly entertaining myself during a recent holiday car trip, I didn't expect to be derailed before reaching the first tale. The introduction is an ode to the editorial work of John W. Campbell, as many of the stories contained herein have his stamp of approval. As the editor of Astounding, he forged the "Golden Age" of science fiction, debuting authors now seen as primary pillars of the genre: Isaac Asimov, Robert Heinlein, Lester Del Rey, Alfred Bester, A.E. van Vogt, Fredric Brown. Trends have come and gone, minor names have exited the mainstream the way they always do, but all these fellows are still in print and Campbell's most famous short story has to date been been filmed thrice. Not bad for sewer-dwellers, as critics of their generation (and at least one more following) tried to paint it.

Emerson spoke of his Giant following him around -- a highbrow version of Wherever you go, there you are. It's not displayed anywhere, but I still have The Stonehenge Connection. And from time to time, I will take a moment to wonder why. The ugly plotting, the plagiarized characters, the cartoon dialogue, the misadventures in narrative only a naive and heavily pimpled teenage could love ... should anyone ever find it, my death certificate will read: spontaneous combustion brought on by acute embarrassment. But Campbell would be the first to tell me: There's no rough draft that can't be improved by hard work. Bet on ending somewhere very different than where you started, but hard work will lead to improvement every time. It's a form of simple math. I'm not looking to saddle up any dinosaurs; I know all too well that directionless travel -- whether through time, space, or both -- can be treacherous folly. But then again, sometimes an errant path will lead you to your Bliss.

History does not always repeat itself. Sometimes it just yells Can't you remember anything I told you? and lets fly with a club.
-- John W. Campbell, Jr.