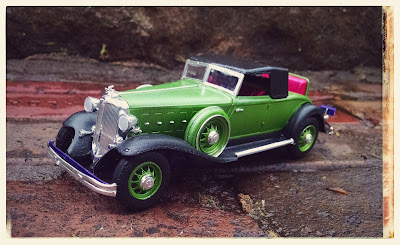 This is a 1932 Chrysler Roadster. Or rather, a model of one.

The kit was purchased by my father some time in 1997, just before his long illness entered its home stretch. He picked up this one and one other, a 1964 1/2 Mustang, at the second-hand shop where my mother volunteered a couple days a week.

I'd never seen my father build a model. It had been a passionate hobby during his younger years, but by the time I came around he was chiefly preoccupied with programming computer systems for International Paper Company -- intricate detailing of a more intense nature, undoubtedly leaving him little headspace for hobbies. He'd put just one final kit together, right before or around the time I was born: an aircraft carrier. I recall it perched on a shelf near the kitchen and to me, at that age, it seemed credible the long plastic hull might be only slightly smaller than actual size. I used to poke the tiny planes, all glued down in a perfect line along the forward deck, to see if I could make them wobble. I never could.

Growing up in sun-bleached 1970s suburbia, I assembled my fair share of glow-in-the-dark monsters, giant insects, dinosaurs, superheroes, and space ships -- though never with much finesse. Of course I was just a kid, more interested in playing with the finished models than in building them. The build was a hurdle to be cleared before the real fun could begin. Which meant a cursing of sloppy paint jobs, clumsily fused joints, misaligned seams. Nothing like the precision decal work on the biplanes and X-Wing fighters hanging in suspended battle from the ceilings of my friends. And certainly nothing like Daddy's aircraft carrier, by then long disappeared in the shuffle of our semi-regular company-mandated moves across the Southeast.

By contrast, from 1998 onward the Roadster and Mustang model kits moved with me as though duty-bound, apartment to apartment, city to city, for fifteen years. I was waiting for, I don't know, the day I'd wake up with Master Model Builder Skills, by way of osmosis or alien intervention, whichever. To honor Daddy, I would do the job right: the contents of those boxes would suffer no wonky wheels, no thumbprints in the paint. None of the planes would wobble. So they waited in storage closets or on high shelves, blending into the shadows, seen often but noticed rarely, like most good intentions ultimately nothing more than the space they took up. Then one day last summer following the kind of run-of-the-mill health scare that comes as no exceptional surprise after a certain number of decades yet still inspires no quantum amount of mortal contemplation, I was puttering in the office -- shredding old bills, rearranging books, talking nonsense to myself, the usual -- when a shaft of magic afternoon sunlight struck those faded boxes out of their shadows, lifted the dust right off them.

My relationship with Daddy was something of a 50/50 split. As a child, I was too intimidated by the man to know how to love him: he seemed too distant, too stern, too heavily possessed of a clenched brow after a day's work at his keypunch machines. My inabilities at higher math seemed to greatly disappoint him, as did (so I supposed) my tendencies towards books and television rather than the woods and sports (passions of my older brother, as if he and I were expected be the same child). Eventually I assumed an unspoken truce had developed between us -- he would abide my whimsies so long as I stayed out of his way, so I did.

I was, as it turned out, wrong about all this, but remained clueless until my my teen years, a Saturday afternoon that found us staring together at a college basketball game, a moment he chose to tell me how much he had loved watching Pistol Pete play ball at LSU. Lo and behold, I learned my father was a connoisseur of the game, partook of his office bracket pool every spring when the tournament rolled around, had even played in high school. It was as simple as having a few conversations, next thing I knew, we were buddies. Had more in common than I had ever guessed. Stayed that way, until the end. (And damn if we never did discuss model building....)

Putting that Roadster together, so many years later, I found an obvious ghost at my shoulder. Wasn't he just out of sight, judging my work, giving me that cryptic line about how there are many ways to get a job done ... but only one right way? And then chuckling, like some wicked Zen master. And from there, of course, less superficial judging, because a child never runs out of questions for a departed parent. The last time Daddy saw me, I was a back-room bookstore clerk. How would he view my subsequent adventures, my trophies, my wrong turns, my happy landings?

My mother tells me Daddy bought these models for the same reason Mallory gave about climbing Everest. Makes sense; he never seemed particularly enamored of cars, looking mostly for value, not badassery, whenever the family needed a new sedan. (Excepting his mid-life crisis car, a Ford Maverick Grabber, which despite the orange color turned out to be a special kind of lemon.) What the model kits would add up to, whether a Roadster or a Mustang, didn't matter to him: he was interested in the process, in the doing. He just never got the time.

So, on his behalf, I took my time. And in so doing, in the meditative joy of whittling away imperfections in the plastic molding, of filling in cracks between pieces, of meticulously layering paint to various textures, I believe I glimpsed some reflection of a private joy my father might have taken in his work, programming computers in a time when information was shuffled among punched index cards. Patience. Attention to detail. More patience. Checking your work. And only then the satisfaction of watching a long string of processes come to a result, whether executed or printed out. Really, it's just a guess -- I was too inexperienced to have ever formulated any meaningful questions about work and what it can, should, and shouldn't mean to us, what it might have meant at least to Daddy -- but I knew him pretty well, and I can recall what sort of puzzles and challenges he liked to solve and how. This model building thing, this makes a certain sense.

Maybe the Roadster could have turned out better ... but for a second-hand kit -- missing parts, pieces warped, looked like some kid incorrectly fused some of the wheel parts and then gave up, same as I'd have done, maybe -- it turned out pretty well. I was too timid about my hand painting abilities, so other than tiny details everything is spray painted. But in the year since, I've completed several other kits (including a reissued creature-feature tableau I screwed up royally, back in the summer of '76), each time to no surprise growing a bit more fleet with the brush, more accurate with the glue, more tolerant of tacky paint (because model building is one part model building, eight parts watching paint dry). A lesson passed down, dusty boxes be damned: Turns out all you need to dissolve botched paint jobs and crooked joints and wonky wheels is just a little bit of ordinary time.

Aside from that poor old Forgotten Prisoner, I've built only cars. Maybe when I'm finished with that Mustang, I'll build an aircraft carrier. Or rather, a model of one. 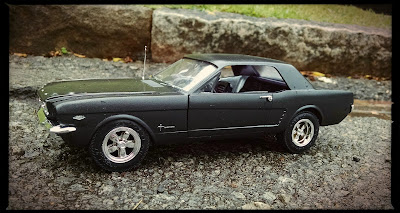 Email ThisBlogThis!Share to TwitterShare to FacebookShare to Pinterest
Labels: Ephemera