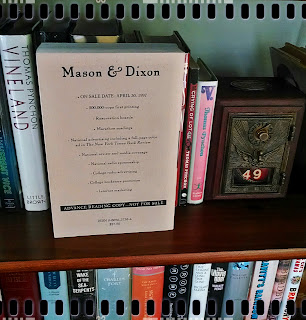 This is an advance reader's copy, an artifact from my bookseller days courtesy of a generous sales rep, one of 500 with promotional information on the back (another 500 were in generic wraps). I'd only made it through the Transit of Venus section when the first hardback editions came in, so this one is essentially unread, a treasure. For a long time, I had one of the specially-printed cardboard crates Henry Holt shipped the early printings in (like many things, it didn't survive my time in Montgomery), but I do still have some ridiculous promo cards, suitable for framing, advertising the cinderblock-sized tome as a breezy beach read, canvas lounge chairs parked beneath particolored umbrellas and all. Because, why not. It's only science fiction, after all.
Posted by Gilbert Jim at 4:38 PM