To Kill a Flying Rumor 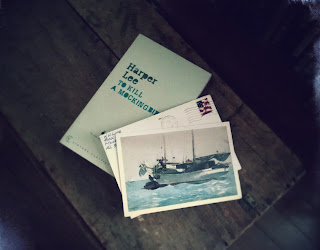 Once upon a time, back when dinosaurs read newspapers and so forth, I wrote a short piece for the Mobile Register's Sunday Book Page about why I thought Harper Lee was in fact responsible for To Kill a Mockingbird, despite regional gossip to the contrary that the book is at least partly the work of Truman Capote. As a hot-button topic of cultural conversation in Alabama, this nugget of literary intrigue ranks up there in popularity with perpetual Iron Bowl remembrances/prognostications/trash talk. I learned this firsthand: my byline included the name of the library where I worked, so the phone began ringing at 8am on Monday morning, a flattering number of readers looking to chat with me, to agree, disagree, work the Iron Bowl in there somehow, et cetera.

That Thursday evening, just as we were locking the doors, the phone rang one more time. I took the receiver, still flattered but really just wanting to head home for the night. From the other end, an older woman's voice, Is this Jim Gilbert? Yes. The same Jim Gilbert who wrote the article on Mockingbird that appeared in Sunday's paper? Yes, that's me. Well, I just want to say, that's a very nice article you wrote. Thank you very much, you're very kind. And I want to let you know: you're right. I did write that book.

The sort of thing that stops your heart.

For the next moment or two, I made little more than croaking noises. She was gracefully pleasant, complimentary of my writing in a few words, and hung up before I could embarrass myself too badly.

Once the room stopped spinning, my first duty was to check the whereabouts of a couple well-known literary pranksters, for whom the telephonic impersonation of a little old lady would be considered junior varsity-level conning, only to find them as truly flabbergasted as myself by the story I was telling. Continuing to check around over the next couple days, a process I'd liken to inquiring about whether or not I'd just seen a ghost, the truth grew clearer and more hilarious: I had indeed fielded a call from Harper Lee.

When Stories from the Blue Moon Cafe was published the following year, I contacted my editor at the Register, John Sledge. The phone call had meant a lot to me, did he know of any way I could send a copy of the book with a note of thanks? Some strings were pulled along the coconut telegraph, a few days later I had a PO Box address in Monroeville. I entrusted the book to the mailman, expecting nothing more.

Turns out, Harper Lee is prompt with her Thank You notes.

What a lovely thing to do. I have just now (noon) received The Blue Moon Cafe stories, and look forward to reading yours first. I can pre-judge (ala Sydney Smith) it to this degree: if you are not the greatest writer in the world, you are certainly the nicest.

It is I who am in your debt: for many years I've had to live with the Truman Capote rumor, which was kept briskly alive in Monroeville and beyond, not only by an envious aunt of his, but by an envious Truman himself. You may wonder why, with his great gift of words, he could envy anyone, but the truth is he envied any writer's success, and when TKAM, written by his oldest friend, was successful, his reaction was deep and bitter. Imitation was his sincerest form of envy: he copied my style, copied Carson McCullers, copied Eudora Welty and had what his friends called his Henry James Period.

So thank you for putting forth the idea that I might have written my own book! 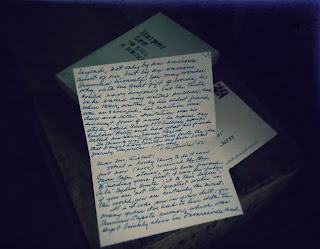 She concludes with a (see over) leading to three lines on the back of the card, an unnecessary wish: I hope that during my lifetime you don't put this on sale at your bookshop! Best, N.H.L.

So there I was. Heart-stopped again. Thinking to myself, There's been a terrible accident somewhere in the Universe, that I have ended up holding this treasure. Something I still occasionally think. Or, maybe those aforementioned literary pranksters pulled off quite a multilevel con on me after all: impersonation, accomplices, forgery, mail fraud, everything. I'm sure there are some who would be eager to think so. But that's a nutty idea, a conspiracy without a core -- much like the idea that Harper Lee isn't the author of To Kill a Mockingbird, right?
Posted by Gilbert Jim at 6:53 PM