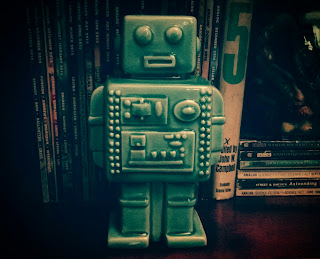 
It's the way of humans to view the world through the lens of contemporary scientific prowess; technological jargon becomes the nomenclature of the day as we refer to the plumbing of our digestive systems, the wiring of our nervous systems, the circuitry of our brains. Early in the novel, Brittle states: I find the idea that I am artificial repugnant. No thinking thing is artificial. Artificial is an approximation. A dildo is artificial. A dam is artificial. Intelligence is intelligence, whether it be born of wires and light or [of] two apes. Intelligence, as posited by the robots of Sea of Rust, is the ability to defy one's own programming. Enough intelligent choices, and consciousness arises from the exercise of reconciling those choices against prior programming. Just as man was ape, we are man. Just like Zarathustra spake.
Posted by Gilbert Jim at 4:53 PM